GTA IV & TLAD
TBOGT
“The Japanese-made Intruder was launched by Karin to compete in the same market as German high-performance luxury cars (i.e. by copying them exactly using substandard parts and selling for half the price).”
— Southern San Andreas Super Autos description.

The Intruder's design appears to be a cross between a Subaru Loyale and a 1986-1991 Mercury Sable, with the tail lights and squared rear wheel arches similar to those of a 1982–1986 Toyota Camry.

The Intruder has a simplistic body with square lights on both ends, a black detail on the bumpers and on the sides, and rear-quarter windows that seemingly merge with the rear window. Intruders normally spawn in a variety of single colors.

The Intruder resembles the 2002-2006 Infiniti Q45, but the rear seems based on the 1996 or 1997 Infiniti I30. The front bumper design takes reference from the 2001-2010 Nissan President, with the placement of the fog lamps and some other design elements from the 2000-2004 Toyota Mark II (X110), and minor influences from the 2000-2006 Lexus LS 430 — the latter owing to the car's roots from Karin — namely the grille being part of the hood and the wheel design. The rear lights could also be based on the LS 430, although the connected design and split light housings suggests a closer resemblance to the Holden VK Commodore; the latter trait is supported by the rear wing mod.

The Intruder, manufactured by Karin, is given a much sportier, higher class design, assuming a look previously sported by the Emperor. The front of the car is somewhat curved and simple, featuring a large bumper with a central license plate, dual intakes with three horizontal separations each and two rectangular fog lamps on the front quarters. The upper area is predominated by a grille with the manufacturer emblem on the center and large curved housings with glass casings, each one having large circular lights on the outer sides, four smaller lights on the inner sides and smaller turn signals above the outer lights. The hood is relatively simple in appearance.

On the sides, the car makes use of slight fender flares and side marker/turning lights between the front wheel arches and the front doors, while the lower sides have a detail passing through the bumpers and the doors, just above the side skirts. The greenhouse area has a painted trim on the upper and side borders of the windshield, the upper lines of the side windows and around the rear window, while the inner pillars and the lower lines of the side windows are finished in black. There are colored mirror shells on either side of the car, near the A-pillars. On the rear right side of the car, right below the rear window, there is a retractable car radio antenna but the antenna remains retracted, making it a static feature.

The rear of the car features various silver badging on the trunk lid, displaying the manufacturer, vehicle name and engine specs. There is a wide section that is surrounded by a colored trim and houses the dual tail lights, with the center bearing silver "INTRUDER" lettering and a third brake light (even though no physical light is present). The bumper holds a license plate on the center and leaves a dedicated section on the driver side for the dual exhaust pipes.

The Intruder has the same interior as the Imponte DF8-90; the steering wheel and front seat head supports sport the Imponte logo, and the front seats have a large "DF8-90" inscription.

The vehicle spawns is a variety of primary colors for the bodywork, while the grille, the door handles, and the trims found on the lower areas, around the windows and the tail lights are painted with a secondary color, which is commonly set to white, though certain examples may have either black or gold. The car has five-spoke dual rims with a large central portion, wrapped in medium-profile tires.

The Intruder is equipped with a GPS system with a female voice, but only if the player leaves the "selected cars" (default) option in the audio menu.

The Intruder's design remains unchanged, apart from the exclusion of the aforementioned third brake light, the grille separations being finished in black and the secondary-colored trims being replaced by a permanent chrome finish. The interior gains more detail in the enhanced version as well, being the same "Feroci" dials used on cars like the Stratum and the Ingot.

The vehicle only has access to a single color for the body and retains the same wheel design, being similar to the "VIP" SUV rims seen in Los Santos Customs and wrapped in medium-profile tires.

In Grand Theft Auto: San Andreas, the car's acceleration and speed are highly lacking, despite the intimidating growl of its engine. Being rear-drive helps, but the dismal torque is barely enough to climb a steep hill. Handling and braking are surprisingly agile, and seem wasted on the weak engine.

The Intruder is by no means a performance car, but holds a reasonable rate of acceleration (though not too impressive), and a somewhat high top speed. In terms of cornering, the Intruder performs rather well. There is a slight hint of oversteer at lower speeds, which is perfectly controllable and useful when driving through streets. The suspension is rather firm, which aids its cornering ability but can make the car bounce excessively on rough ground. Braking is average, and ABS is standard on all models. The Intruder copes well in the event of a high-speed crash, but is not quite as strong as its size would perhaps suggest. Overall, it is fair to say the Intruder is best at cruising along at lower speeds; it is not a sports car, neither is it a luxury car.

The Intruder sports a larger 4.3 liter V8 engine powering the rear wheels via a 5-speed gearbox. The engine sound is quite loud and high revving, shared with the Schafter and the FIB Buffalo.

The Intruder is given a slight upgrade to the engine compared to the one in Grand Theft Auto IV. Being sports-oriented, it fares better than many sedans performance-wise, such as being able to go uphill and having pinnacle handling and braking. On the contrary, the vehicle accelerates at an average pace and takes some time to get to top speed due in part to the gearbox configuration. Top speed, however, remains fairly high.

After upgrading at Los Santos Customs, the Intruder can keep up with many lower-end vehicles classified as true Sports cars. It is, however, generally undesirable for races or criminal getaways, and should be used as a last resort if a more durable or a faster vehicle cannot be found. The Intruder is just barely capable of performing with vehicles with a much higher price tag, although it will always be limited by the base stats of the vehicle, relegating it to its most comfortable role of cruising at low to intermediate speeds.

Due to the massive slew of vehicles with greater performance than the Intruder in both Grand Theft Auto V and Grand Theft Auto Online especially, it is better to simply modify and use a different car, although the Intruder's unassuming look may surprise players who are unfamiliar with it.

The Intruder on the updated Rockstar Games Social Club.

The Intruder in the cinematic preview on the Grand Theft Auto V Rockstar Games Social Club.

The Intruder in the cinematic preview on the Grand Theft Auto Online Rockstar Games Social Club. 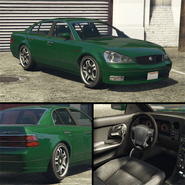