La Puerta Freeway
La Puerta Freeway or Interstate 5 is a freeway that runs through the southern part of Los Santos. It starts/ends after a T-Intersection off the Del Perro Freeway and runs through West Los Santos as the Miriam Turner Overpass before it ends at the Port of LS and turns into Elysian Fields Fwy.

The La Puerta Freeway is an Interstate highway in the in-game Interstate system. It is one of the four Interstates in GTA V.

Aerial shot of Interstate 5 with the Miriam Turner Overpass in the background. 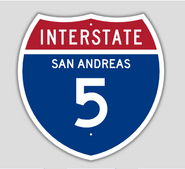 A 1957-present California style Interstate 5 shield.
Add a photo to this gallery
Retrieved from "https://gta.fandom.com/wiki/Interstate_5?oldid=1257063"
Community content is available under CC-BY-SA unless otherwise noted.