Interstate 4, also known as I-4 and the Olympic Freeway, is a freeway in Los Santos and the southeast of Blaine County in Grand Theft Auto V.

Interstate 4 runs between Interstate 5 to the west and the Palomino Highlands to the east. It is co-signed with Route 15 east of Route 17 until the I-4 designation ends at Sustancia Road.

I-4 begins at a semi-directional T interchange with the upper deck of Interstate 5. The Olympic Freeway, as it's called in Los Santos, borders the Downtown and South Los Santos areas. It is completely elevated with four lanes on each side and the Los Santos Transit Arrow line and Strawberry Station running along the freeway's median.

Once it leaves the downtown area, It crosses Route 17 at a "scissor-loop" interchange before flying over the Four Level Interchange-inspired intersection of Route 20 and Interstate 2 one thousand feet later. At this interchange, the route loses two lanes in each direction, and becomes co-signed with Route 15. From this point, it becomes the Palomino Freeway, a rural highway that bisects the Tataviam Mountains and Palomino Highlands. Interstate 4 ends at a two-stack semi-directional T interchange with Sustancia Road.

Although the Interstate system connects all of Los Santos, it is not possible to drive directly on Interstate 4 to Los Santos International Airport. To get there, the player must intersect with Interstate 5 in Little Seoul, then drive approximately 1400 ft and exit to Route 22 and immediately exit to Route 19.

Interstate 4 showing the Los Santos Metro line in the median.

Aerial shot of Interstate 4 showing the Los Santos Metro line in the median. 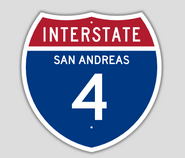 A 1957-present California style Interstate 4 shield.
Add a photo to this gallery

Retrieved from "https://gta.fandom.com/wiki/Interstate_4?oldid=1164274"
Community content is available under CC-BY-SA unless otherwise noted.