I-2
and Strawberry Avenue - Downtown

Los Santos Freeway
Senora Way
Interstate 1 is an Interstate highway in the eastern part of San Andreas. It connects the Grand Senora Desert to the Los Santos International Airport, via Strawberry Ave.

Interstate 1 begins from the south on Strawberry Avenue, at the intersection with the Del Perro Freeway in Textile City andStrawberry Avenue. It begins as the Los Santos Freeway, a six-lane urban freeway traveling northeast, passing between the Vinewood Racetrack and the Vinewood Bowl. It then begins to turn north while narrowing to a rural four-lane freeway at the Route 18 interchange, and skirts along the western edge of the Tataviam Mountains. This part is co-signed with Route 13.

At the intersection of the Palomino Freeway, the two routes split with Route 13 continuing north as the Senora Freeway and I-1 (according to the exit guide signs) turning toward Route 15. As soon as it goes onto the Palomino, it immediately exits onto Senora Way, where it travels north again toward it's north end at Route 68. 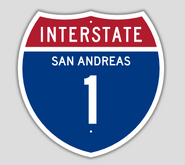