“IF99 is the home of international funk - playing a great selection of classics from West Africa, the U.S. and elsewhere.”

IF99 (International Funk 99) is a radio station in Grand Theft Auto IV that plays funk and afrobeat.

The station is hosted by musician Femi Kuti, the oldest son of Fela Kuti who was hailed as "inventing" Afrobeat in the 1970s. Both of them appear on the soundtrack, Femi's song being the only one made after the 1970s. The station is not featured in Episodes From Liberty City, being replaced with K109 The Studio, its "sister" station in GTA IV.

In Grand Theft Auto IV: The Complete Edition, IF99, along with all other GTA IV exclusive radio stations, appears in The Lost and Damned and The Ballad of Gay Tony.

This is one of Bernie Crane's preferred radio stations. 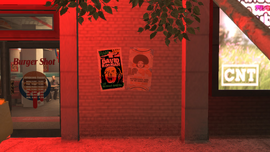 Promotional poster in The Ballad of Gay Tony as seen in Star Junction.[2](Texture)