View source
Not to be confused with the Internal Affairs Division (I.A.D.)
For the purchasable properties in Grand Theft Auto Online, see Agencies.

“We all know you Agency boys are balls deep in a plot to drive up your funding by any means necessary.”
— Steve Haines

The agency appears to be based on both the Central Intelligence Agency and the National Security Agency.

According to Steve Haines, the IAA is apparently heavily corrupted and abducts public funding for their own benefits - the IAA's moral flexibility is further confirmed by Karen at the end of The Humane Labs Raid, where she comments about how the IAA can get anyone to do their dirty work by paying them.

In 2013, the IAA began to lose funding as terrorist activity had calmed down. This caused the IAA and the FIB to be involved in a bureaucratic fight over which agency will receive more government funding. In 2013, the IAA kidnapped Ferdinand Kerimov, an alleged terrorist, and faked his death to "remove him from the record". The IAA then moved him to their headquarters for torture and interrogation. Michael De Santa, on Steve Haines' order, abducted Kerimov in the middle of a torture session, with the help of Trevor Philips and Franklin Clinton. Michael along with Trevor and Franklin hijack an IAA funding truck which, as Haines says, are corruption-related fundings from drugs.

Steve Haines would make the claim that the agency had tasked Humane Labs and Research to develop a strong neurotoxin. When it was finished, the IAA would then release the same neurotoxin in a major metropolitan area and pass it off as a terrorist attack to hopefully re-instate their budget due to the demand by the public to stop terrorism. The alleged plan was foiled, however, by Steve Haines and Dave Norton, along with Michael De Santa, in an infiltration through the facility. Said operation ended up with Haines captured, but failed to intercept the helicopter that was carrying out the refrigeration unit with the neurotoxin.

Another heist on Humane Labs and Research by a different party would seemingly reveal that the neurotoxin was being developed by Merryweather and not the IAA.

Later, the IAA managed to intercept Michael, Dave, and Steve while they were confronting each other at the Kortz Center. Led by their undercover agent, the IAA team managed to corner the three men, up until rogue FIB agents and Merryweather Security ambush the entire group. It led to a huge firefight, and the IAA agents were killed.

In 2017, during the events of GTA Online: The Doomsday Heist, the IAA was involved in stopping a plot by Avon Hertz to destroy the surface world with nuclear weapons. The event included working with some rogue russian agents and a group of operatives working for Agent 14.

In the summer of 2022, the IAA hires the GTA Online Protagonist as a special IAA field agent to investigate a budding criminal conspiracy in Southern San Andreas.

While the IAA do work to protect America, their methods in doing so can be highly pragmatic and morally gray, such as using extreme interrogation techniques and threats of forcing objects into their detainees' orifices.

The IAA are known to use criminals for off-the-book missions and will use blackmail, threats, or simple payment to motivate them. As stated above, Steve Haines claims they are corrupt and they have indeed proven to be morally flexible when needed, but it should be noted that Haines himself was highly corrupt, and his career was apparently threatened.

In an apparent contradiction to Haines' accusations that the IAA created a chemical weapon at the Humane Labs, an IAA agent known as Agent 14 would organize a similar raid on the Humane Labs himself, claiming that the nerve agent there is being developed by Merryweather. While either of them could potentially be lying, 14 would ultimately prove to be more trustworthy than Haines, as the IAA seems to retain assets rather than kill off loose ends, as Haines would try to do with those that he conscripted. Subsequent operations at the Humane Labs would lend further credence to Agent 14's claims as both a gunrunning operation, a casino heist and a security contract show that the lab is operated by Merryweather and not the IAA.

The IAA is also involved in the gunrunning business. Though this may also be off-the-books, they are known to use motorcycle gangs and organizations to do sales and resupplies, as well as stop unsanctioned sales. It is also known that there may be rogue agents within the agency, as seen in the mission Work Dispute.

In addition to their apparent rivalry with the FIB, the IAA seem to dislike Merryweather, as Agent 14 can be quoted as saying that while Merryweather may work government contracts, it doesn't even remotely make them the "good" guys, which the IAA seem to consider themselves. They also seem to have a far more openly hostile interaction with Merryweather compared to the FIB, as IAA agents have been kidnapped by the mercenaries while the IAA frequently attempts to stop Merryweather operations such as their weapon sales.

According to Mrs. Rackman, there seems to be a system in place that acts as an insurance against potential infighting, as checks won't cash if a number of agents are dead. Apparently it is to prevent agents from killing each other if they have a conflict with one another.

IAA agents can be seen wearing various tops, of different colors. They can wear either a tucked-in polo, a jacket, or a sweater. They sometimes may wear a lanyard around their necks with an ID on it, a badge and gun holster made for a Glock on their belts, a communication device on their right ear, sometimes a police-like tool belt, and a watch on their left wrist.

The U.L. Paper Headquarters (used as a front for the IAA) in The Triangle, Algonquin, Liberty City. 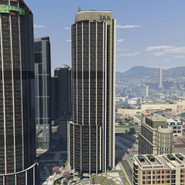 An IAA agent in Three's Company.

A model for an IAA agent.

An IAA agent in the Three's Company cutscene.

An IAA agent with State Troopers.

Maverick (only in Dust Off)

FIB Granger (During Dispatch III and Time to Get Away)

Baller LE (Armored) (Used by IAA field agents in the end of various setup missions of The Doomsday Heist Act 3[1] and in Planning Work: Security Pass)

Granger (Used by Phoenicia Rackman and her team including Agent 14 at the end of Setup: Air Defenses[2])

Buzzard (only in Kortz Survival)

Annihilator Stealth (only in Kortz Survival)

Baller (Seen next to the IAA agents in Crime Scenester)

White Patriot (Exit Strategy and The Bogdan Problem only)

Insurgent (Seen next to the IAA agents in Mole Hunt)

Conada (only in ULP - Cleanup)

Greenwood (only in ULP - Cleanup)

Micro SMG (Time to Get Away and Planning Work: Security Pass only)

Assault Shotgun (only in Kortz Survival)

Assault Rifle (only in Kortz Survival)

Bullpup Rifle (only in The Agency Deal/Finale)

Combat MG (only in Kortz Survival)

Flashlight (only in cutscene and animation)