The Insurgent Pick-Up Custom is a modifiable variant of the Insurgent Pick-Up, where it retains the exact same design and properties as the regular Insurgent Pick-Up, except that a tow-hitch is added, able to tow another player's Anti-Aircraft Trailer. The vehicle can be modified with an array of visual modifications, being armor plates, liveries and respray colors.

Color distribution is the same as its Pegasus equivalent, and retains the same wheel design and color as the aforementioned vehicle and the Insurgent.

Similar to the Pegasus version, the vehicle is equipped with the same machine gun turret that resembles a Browning M2HB .50 caliber machine gun, but can be replaced with a three-barreled .50 caliber Minigun resembling a GAU-19 gatling gun.

The armor of the vehicle remains the same as their equivalents; when the Armor option has been maximized to 100%, the vehicle is capable of surviving up to 27 homing missiles or 14 RPGs (provided that it is occupied by a driver), or extensive gunfire. However, it has large non-bulletproof windows, making their occupants vulnerable to gunfire.

The Insurgent Pick-Up Custom can be equipped with additional Armor Plating that will primarily affect the windows and the gunner position. Adding any Armor Plating will take away the ability for occupants to use throwable weapons, and none of the upgrades render the glass bulletproof.

Similar to the regular version, the vehicle has access to a turret that provide a 360 degree coverage and an elevation range of between -20 and 30 degrees, making it an ideal choice against low-flying aircraft and targets that are close to the vehicle.

Towing an Anti-Aircraft Trailer in collaboration with another player gives the vehicle increased potential, as the trailer turret can provide additional defense when the main vehicle is supressing enemies. Caution should be taken when carrying the AA trailer, as it is possible to trigger a proximity mine that the Insurgent Pick-Up Custom has placed, destroying the trailer. The lack of armor often makes the trailer the first vehicle to lose during a combat.

The Insurgent Pick-Up Custom can only be modified at a vehicle workshop inside a Mobile Operations Center or Avenger. 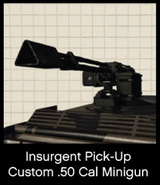 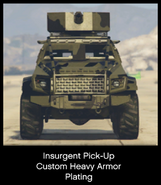 The Insurgent Pick-Up Custom in the cinematic preview on Rockstar Games Social Club. 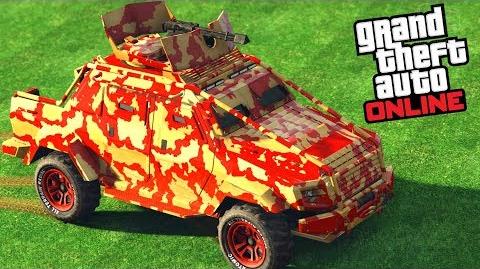 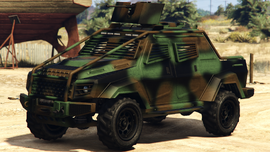 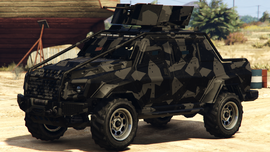