The HVY Insurgent Pick-Up is a Light Armored Personnel Vehicle (LAPV) featured in Grand Theft Auto Online as part of the Heists Update.

The vehicle is essentially a pick-up, armed variant of the Insurgent, where it has an external roll cage and a dedicated section on the roof for the top turret. The rear section no longer features the enclosed compartment and the rear door, allowing two passengers to sit in one of the truck bed's benches.

Color distribution is the same as the normal Insurgent, with the roll bars being painted with the secondary color. It also uses the same wheel design, where the rims can also support a dedicated color.

The vehicle is equipped with a machine gun turret that resembles a Browning M2HB .50 caliber machine gun.

The Insurgent Pick-Up performs very similar to that of its unarmed counterpart. In terms of overall performance, the acceleration is somewhat lacking due to its heavy weight, but it has an acceptable top speed. The Insurgent Pick-Up's immense weight helps to keep it grounded when cornering, and contributes to it having good handling for a vehicle of its stature. It has a decent cornering radius and understeer is relatively minor. The Insurgent Pick-Up is abnormally sensitive in the air, and may be prone to crash landings if the user is not careful. However, it is able to quickly recover from rolling over. Though the engine model or bay cannot be seen, the sound is similar to that of the Landstalker's, but slightly smoother, coupled to a 6-speed gearbox in a front engine, all-wheel drive layout.

The vehicle's sheer weight means that it is a formidable vehicle towards other players. The Insurgent Pick-Up can cripple or even disable many other road vehicles if given a direct hit at full speed, and will usually run over lighter cars, deforming them and often breaking wheels or axles. It also seems to have a degree of top-heaviness that is evident while airborne, however it makes up for it by being able to recover abnormally fast from a rollover, relative to its class. It can also ram parked vehicles and continue to drive without any noticeable damage, and it will only show body deformation after a large number of collisions.

Like the standard Insurgent, it is distinctive by its armored body, which is able to withstand more damage than the average car, even able to withstand direct impacts from explosive weapons, comparable to a Rhino Tank. However, the Insurgent has large windshields and windows, making their occupants vulnerable to gunfire from the front. If the vehicle rolls over while carrying the external passengers and the gunner, they will fall off the vehicle and may either suffer a considerable damage or diying from being crushed by the same vehicle.

The vehicle comes with bullet-proof tyres by default, making them immune to bullet, fire and spike-strip damage.

The accuracy of some information on this page has been disputed.
The required verification is: Needs proper endurance test.
You can help by making this verification, finding sources to prove the integrity of the information or by discussing any changes that could be made on the article's talk page.

The Insurgent Pick-Up can take the following:

Machine Gun: What makes the Insurgent Pick-Up a great vehicle is the mounted gun. Although it seems to have a slower fire rate than the mounted gun of the Technical, it is still lethal to any unarmored target and can be killed easily. Both the gun and the turret hatch may offer some degree of protection against ground-level enemies, but they are stil vulnerable to getting shot from the sides or elevated areas. The turret offers a 360-degree coverage and an elevation range of between -20 and 30 degrees, making it an ideal choice against low-flying aircraft and targets close to the vehicle.

The rear passengers on the Insurgent Pick-Up can toggle between ducking into the vehicle or getting on the gunner seat by pressing right on the D-Pad. This tactic can be extremely useful in case the gunner is very weak and needs to regenerate their health back by ducking into the Insurgent. Once they regains their health, they can press right on the D-Pad to get back up on the gunner seat. Another tactic can be done if there are multiple players on the rear seats, they can take turns being gunners. The ability to use the turret can be done either from the passenger seats or while standing on the roof in case that both rear seats are occupied and another player wants to use the turret.

The vehicle itself cannot be modified at any mod shop, as it is a Pegasus vehicle. However, one can bring it to a workshop inside a Mobile Operations Center or Avenger to convert it into a custom variant and a personal vehicle.

The Insurgent Pick-Up in a promotional screenshot. Note the displaced tail lights. 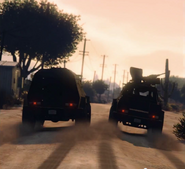 The Insurgent and Insurgent Pick-Up. Note the tail light issue on the armed variant (Prior to IGG2)

The Insurgent Pick-Up on the updated Rockstar Games Social Club.

The Insurgent Pick-Up in the updated Rockstar Games Social Club.

The turret in first person. 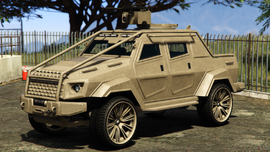 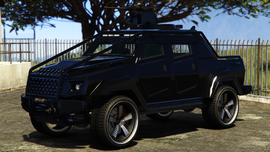 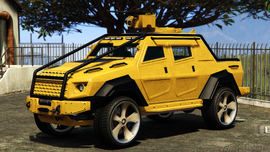