GTA Wiki
Register
Don't have an account?
Sign In
Advertisement
in: Pages with non-numeric formatnum arguments, Vehicles, Vehicles in The Lost and Damned,
and 11 more
English

“Join the almost hubless revolution and get a hole in your wallet as big as the one in your back wheel. Nothing says weekend warrior like this custom chopper, khakis, and a leather jacket.”
— Southern San Andreas Super Autos description.

The Liberty City Cycles Innovation is a chopper featured in The Lost and Damned and later reintroduced in Grand Theft Auto V and Grand Theft Auto Online as part of the Last Team Standing Update.

The Innovation is a radically designed custom chopper with fine detailing and unconventional design elements, most notably featuring a rear wheel with a sprocket connected to the chain drive that is directly mounted onto the rim and encompasses the diameter of the rim. The handlebars and headlight are inspired from the Harley Davidson Breakout, while the body shell (primarily the rear wheel) appears to be based on a Billy Lane Choppers Inc. model.

The vehicle features an elaborate tribal paintjob which incorporates Lost's insignia on the fuel tank, and further encompasses the wheel covers or mudguards, and even the outer extent of the rear rim. There is no LCC logo on the bike, but on the police radio, it can be heard that the bike is manufactured by them.

Returning to Grand Theft Auto V, the Innovation uses the almost exact same design as in TLAD, albeit with a newer color scheme thanks to the improved color-spawning system. Unlike in TLAD, the Innovation does not have any customized paintjob and is no longer a gang bike. Furthermore, its wheels and bodywork cannot be modified, and its modification options are severely limited, compared to other bikes.

The Innovation is powered by a odd-firing engine, with a large V-Twin engine model, and handles smoothly. Its turning radius is smaller than that of the Hexer, and the Innovation's brakes are very strong, but they are definitely not the best in the game. Acceleration is average but top speed is impressive, and this is most likely due to its compact size and lighter weight. Due to this, it is one of the easiest choppers to ride in TLAD.

Due to GTA V and GTA Online's enhanced physics, the Innovation now has much stiffer handling, wherein cornering is much more slide-free. Braking is much more responsive than its TLAD counterpart, and acceleration seems improved. The loss of weight also allows the bike to achieve higher top speeds. 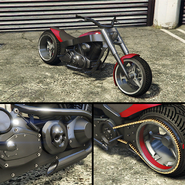 The Innovation on the updated Rockstar Games Social Club.

The Innovation in the cinematic preview on GTA V Rockstar Games Social Club.

The Innovation in the cinematic preview on GTA Online Rockstar Games Social Club.