"Reputed to be the safest car ever made, this classic Vulcar station wagon has been the vehicle of choice for really terrible drivers for 20 years. The closest thing you'll ever get to a tank for under $10k."
―Southern San Andreas Super Autos description.

The Ingot is a station wagon which appears to be primarily based on the 1996-2001 Nissan Stagea and 1992-1997 Audi 100/A6 (C4 Chassis) with influence of the 1993-1997 Volkswagen Passat (B4). The car is also a subtle nod to Volvo station wagons with its rigid construction and boxy appearance, though there is little similarity in overall appearance.

In Grand Theft Auto IV, the Ingot is equipped with a GPS system with a male voice, but only if the player leaves the "selected cars" (default) option in the audio menu.

The Grand Theft Auto: Chinatown Wars rendition of the Ingot retains the same styling from the GTA IV rendition, albeit much simplier in details. In other platforms, the Ingot has more detailing than the Nintendo DS version of the game, although it lacks the luggage racks on the roof.

Despite sporting a racing steering wheel and pedals, the Ingot is underpowered and the car's appearance remains unchanged in Grand Theft Auto V, though it is now a front-wheel drive.

In GTA IV, the Ingot is an all-round well performing car, but it is not at all performance-oriented, befitting of its family car nature. The vehicle has nimble steering and relatively supportive suspension, allowing good cornering (albeit not at high speeds) and good acceleration. Its light weight also makes it easier to gain traction, and gives the car more potential in acceleration, cornering and braking. The vehicle is also rather durable, which is acceptable considering its body style. The vehicle takes a reasonable amount of damage before the engine begins to smoke, and performance is only slightly affected by deformation and locked wheels.

The vehicle features a double overhead camshaft inline 4 engine model, which is laid transversely, powering the rear wheels and coupled to a 4-speed gearbox.

The Ingot has a low-powered straight 4 engine, laid transversely, coupled to a 5 speed gearbox in an FF drive-train layout. The Ingot is not very fast; its high-gear ratios mean that, after finding fifth gear, the car bogs down and hesitates to shift back into fourth, making highway driving painfully slow at times. The Ingot does, however, have decent handling, and its suspension is not too hard or too soft, making it perfect for city driving. Fittingly apt for its Volvo roots, the car is very rigid, and has average crash deformation.

Oddly, the Ingot lacks a connecting diff to its gearbox and engine bottom as seen from the rear, as the engine block is laid longitudinally which does not correspond to the engine model seen from the top, which is laid transversely. This is likely a developer oversight. 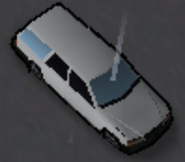 Side view in GTA V.

The Ingot on the Rockstar Games Social Club.
Add a photo to this gallery

A special "VD90R" variant of the car can occasionally be found in GTA IV; it is an Ingot with removed badging and new grill, a discrete spoiler and body kit, and candy red paint. This variant is driven by the Russian Mafia. Is based on the Nissan Stagea 260RS Autech Version with the name being derived from Volvo's 850R.

The "VD90R" variant driven by members of the Russian Mafia in GTA IV (Rear quarter view).

Retrieved from "https://gta.fandom.com/wiki/Ingot?oldid=969778"
Community content is available under CC-BY-SA unless otherwise noted.