Standard White - 100%
“An aerodynamic classic sports car. Turning heads is so last season. Graduate to braking necks with the Infernus Classic.”
— Career Builder description.
“Experience tells you that anything this hot must be crazy, and you're not wrong. The Infernus Classic is the kind of car that'll dazzle you with its perfect cheekbones, empty your bank account, and once you're sleeping in the wet patch it'll finish you off with a rusty machete. What's not to love?”
— Legendary Motorsport description.

Being a Pegassi vehicle, the Infernus Classic takes design cues from multiple Lamborghini vehicles, most notably the Lamborghini Diablo and the Cizeta V16T in its general body shape, scissor doors, engine model and interior (with the blue buttons on the head unit referencing the real-world working relationship between Lambourghini and Alpine Electronics). The vehicle also resembles other 1980s vehicles, most notably a front fascia from the Ferrari Testarossa. The pop-up headlamps were derived from the Lotus Esprit S1 and the aforementioned Ferrari Testarossa, while the tail lights resemble those of the Ferrari F512 M and Ferrari F50. The rims are directly based on those of the Lamborghini Diablo.

The Infernus Classic retains the long body and the rear-mid rear configuration from its modern equivalent, but most of its features lean towards the Grand Theft Auto III model, especially the beta version known as the "Dyablo". In the front fascia, a black grille can be seen spanning most of the car's width, and within the grille there is a set of light clusters consisting of the a lamp, indicator and auxiliary lamp. Small intakes are found below the grille directing airflow to the front brakes. The upper area consists of two pop-up headlamps containing twin circular units, and a bonnet that hinges from the front and opens forward, having a manufacturer badge on the front and a vented duct near the windscreen.

On the side profiling, the overall body shape is most noticeable, giving the car its prolific wedge, lengthened design. The car sports a single strake line which splits air into side intakes, with an upper intake leading to the engine bay and the lower intake to the rear brakes. On the cabin area, plastic trim can be seen around the windows, while conventional wing mirrors are found mounted just behind the A-pillar. The area behind the side windows feature more intakes leading to the upper engine bay constructed from the vehicle's metal body, following on from the B pillar of the window. The B pillar is seemingly endless and meets at the very rear of the car along with the side profile's belt line. The Infernus Classic also features scissor doors, though they do not extend further out of the body. In the rear portion, because of the immense engine size and wedge profile of the vehicle, width at this point is most extensive. The B-pillars separate to merge with the rear side body panels, leaving ample room for the engine hood cover - a series of slotted covers, with larger slots at the up-most point of the hood and four groups of covers at the rearmost point. The vehicle sports a large V12 engine with offset intake manifolds. The Pegassi wordmark is also found on the intake covers, similar to how the Diablo's intake covers feature Lamborghini wordmarks. While the engine is aluminium, strips of color according to the primary color of the vehicle are found on the intake covers. The side cold intake piping is seen entering the engine intake manifolds from the rear.

The rear end consists of a carbon-fibre panel with plastic fittings on the surrounding, sporting unique rear lamps, of which the inner lamps consist of reverse lights. Below the lamps, twin exist dual exhausts emerge from plastic plating inset into the bodywork. A rear grille is also found underneath the central license plate.

The Infernus Classic's interior is unique, where the driver-side dashboard features a boxy design with blue dials derived from the Banshee, but rearranged in a way that the main dials are found beside the smaller gauge cluster and numerous warning lights below these. Two air con units are found on the dashboard above the central column, while an airbag cover can be seen on the passenger side. The central column features a carbon-fibre panel with two gauges, a radio set, gear stick and numerous buttons across the same panel. The Pegassi wordmark is found on the passenger side airbag cover, horn cap, floor mats, and a case next to the gear stick.

The primary colour of the car is applied on the body and the details on the engine cam covers, while the secondary one is applied on the mirror wings, rear vents behind the windows and interior stitching. A trim colour is also available for the dashboard, doors and seats, as well as a detail surrounding the horn cap. It uses a unique set of rims consisting of six rounded spokes with circular spacing between these, with bolt details on the surrounding and around the centre, together with low-profile tyres.

The car's boxy yet aerodynamic design pays off in terms of performance. While having a statistically lower top speed than its rival, the Turismo Classic, and a much heavier weight, the car is still agile and has acceptable acceleration. The lengthy design causes oversteer at times, but is still able to maneuver relatively well.

The Infernus Classic is powered by a large V12 apparent when the engine's rear compartment is opened, coupled to a 6-speed gearbox in a rear-engine, rear wheel drive configuration. It shares its engine sound with the Infernus.

The Infernus Classic in an official trailer.

A promotional preview of the Classic Infernus, showing the pop-up headlights. 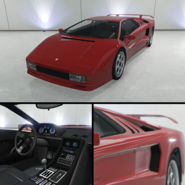 The Infernus Classic on Legendary Motorsport.

The Infernus Classic on the Rockstar Games Social Club.

The Infernus Classic on the updated Rockstar Games Social Club.

The Infernus Classic in the cinematic preview on Rockstar Games Social Club.

Alternate badge, used in an advert. 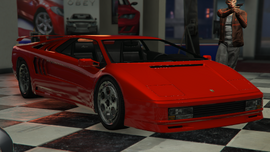 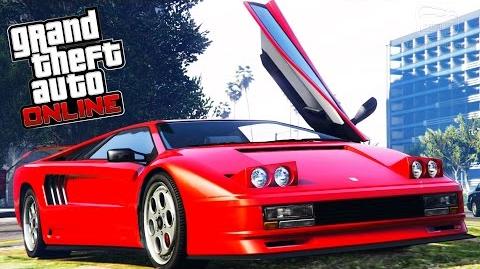