View source
watch 02:56
Raise a Floppa - The Loop
Do you like this video?
Play Sound
For the stripper in Grand Theft Auto V, see Infernus (stripper).

“The Italians are unrivalled in flamboyance, sex scandals and financial improprieties. Now you can be too!”
— Southern San Andreas Super Autos description.

The Infernus is a supercar that was first introduced in Grand Theft Auto III and has appeared in every GTA title since (except Grand Theft Auto Advance) and has gained a reputation for being one of the oldest sports cars to still be in a vast number of GTA titles. It is manufactured by Pegassi in the HD Universe.

“Extremely expensive. How can we expense one of these? Only those idiots in undercover get to drive these.”
— GTA Vice City Website.

Between Grand Theft Auto III and Grand Theft Auto: Vice City Stories, the Infernus has appeared in three different forms, each illustrating the car as a sleek, low-profile sports car comparable to the Cheetah.

All renditions of the Infernus are available in a variety of monotone colours. In GTA San Andreas, the Infernus can be modified at any TransFender modification garage.

The Grand Theft Auto IV rendition, manufactured by Pegassi, is largely based on the first generation Lamborghini Murciélago, combined with the side-paneling of a Lamborghini Diablo (most notably the side windows) and the rear fascia and venting of an early model Pagani Zonda and Spyker C8.

The Infernus is characterized by the long body and the rear-mid rear configuration, sharing similarities with the GTA III and GTA Liberty City Stories renditions. The front bumper of the car features a carbon-fibre bottom/extender with an elevated area on the centre, along with three grated intakes. The upper area features a set of circular headlamps in carbon-fibre housings, protected by glass casings. The bonnet has a small manufacturer emblem on the front and a thin intake near the windscreen.

The sides denote its aerodynamic profile, featuring a set of skirts with an intake duct just in front of the rear wheels, as well as "PEGASSI" badges. The greenhouse area makes use of plastic trims around the windows, with a fuel inlet on the driver side. The Infernus is also the first car in the series to feature scissor doors; however, they appear to rotate away from the vehicle body, unlike the standard scissor-door design and purpose. This design trait allows the Infernus' doors to be self-closing, relying on gravity to fall shut from its opened position. Also featured are small, racing-style wing mirrors, roof scoop and rear louvers.

The rear of the car is prominently covered in carbon-fibre, housing the five-exhaust set on the centre and the split circular tail lamps on the outer edges. The sections in between are occupied by grated vents exposing part of the engine bay, with the driver-side one bearing the "INFERNUS" badging. What appears to be two fins can be seen at the bottom. The Infernus may spawn with a rear spoiler as an extra.

The interior is fully finished in black leather and uses the same sport seats as the Comet. Sections of the dash and transmission tunnel are finished with carbon-fibre accents.

The Infernus is set to spawn in a variety of monotone colours on the body, although it is capable of supporting a secondary colour for a stripe over the side skirts (only seen on special variants). The car uses a set of five-spoke rims with bolt details on the surrounding and wrapped in low-profile tyres, with the rear ones being wider.

The Infernus in Grand Theft Auto: Chinatown Wars shares the same design from the GTA IV rendition, although it is only available without a spoiler and features conventional doors.

The Infernus in Grand Theft Auto V and Grand Theft Auto Online appears to be unchanged from Grand Theft Auto IV, except for the rim and interior design. The rims on the Infernus match the rims used on the Lamborghini Reventón, a limited production car based on the Murciélago. It also has a new, red interior, though only in the last-gen version of the game; the enhanced version shares its predominantly-black interior with the Comet and Furore GT.

Colour distribution remains the same as in GTA IV, but the interior stitching matches with the primary colour of the car. The rims are identical to the "Shadow" high-end rims also available in Los Santos Customs.

The Infernus' performance remains similar in all of its appearances by being one of, if not the fastest car in each game. Unlike subsequent depictions that have an all wheel drive system, the Infernus in GTA III has a rear wheel drive layout.

Despite the change in drivetrain layout, its handling remains similar and its all wheel drive system means the car has good front grip. However, it suffers from understeer due to its small wheels and wheel wells. Caution must be taken while braking as the wheels usually lock up during high speed braking. Power distribution is considered smooth, but due to its high-power output, moderation must be used when taking turns, otherwise fishtailing may ensue. Its suspension in GTA III and GTA Vice City, however, is softer, allowing it to drive over curbs without jolting the car substantially or bottoming out. Additionally, the drag multiplier is only 1, which means it is the most aerodynamic sports car in the game - this probably answers why it is often a bit difficult to handle. One of the downsides of the Infernus is its low durability, as it catches fire only after a few collisions.

In GTA Vice City Stories, the Infernus' AWD drivetrain has a 20% front, 80% rear torque distribution, and what sounds like a supercharged engine. With such speed and power, it is great for cruising along the beach, although its turning radius will suffer. The AWD drivetrain can be easily seen by flipping the car over; switching between the handbrake and regular brakes, while applying gas.

The Infernus returns retaining its renowned performance of high speed and acceleration. It is highly susceptible to deformation from high-speed impacts, due to its light body construction and rear mounted engine. Windshield ejection is also common due to the lack of substance in the front of the car. The Infernus is one of the best racing cars, but does suffer from understeer during high speed turns. However, the mid-engine configuration makes it unlikely to break down or be set aflame from front-end collisions. It is also good at performing quick J-Turns.

The in-game engine model is not very detailed, and cannot fully reveal the engine cylinder configuration. However, it can be said to be a V8, as it shares the same base model as the Turismo (which is stated in the Auto Eroticar website to use a Quad Cam V8), except it has "Infernus" engraved into them. It is laid out in a mid-engined all-wheel drive layout, like most Lamborghinis. The Infernus shares its engine sound with the Comet and the Super GT. It also tends to backfire, like the Banshee, Buffalo, F620, Sultan RS, and Bullet GT.

Returning in GTA V, the Infernus retains its high-performing engine but exchanges understeer for oversteer and general poor stability. As before, it has excellent acceleration and speed due to the AWD drivetrain and what sounds to be a high-revving, high-power engine, but attempting to corner while letting off of the accelerator and not braking will cause wild spinouts and general loss of control. To counter this, the player must always keep either the accelerator or the brakes on throughout the turn. The mid-engine layout provides some measure of resistance against accidents and bullets but otherwise its durability is disappointing, as its wheels can make a positive camber very easily when having side-on crashes.

Again, like GTA IV, the engine is very undetailed and cannot fully reveal the cylinder configuration; however, the website states that is a 6-litre engine capable of pushing 610hp. The original version of the game uses the same engine sound as most supercars like the Cheetah, but in the enhanced version, it uses a higher-revving, louder version.

The "Dyablo", an early beta design prior to the release of GTA III.

The Infernus in the iOS/Android ports. (Note the detailed trim around the headlights) (Rear quarter view) 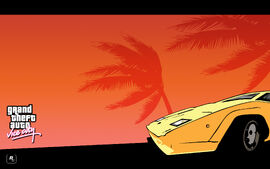 Artwork of the Infernus in GTA Vice City. 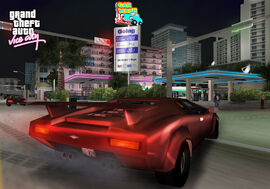 A beta Infernus in "I'm Rich". 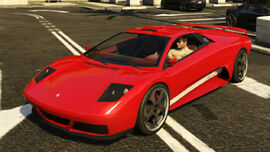 An Infernus in the original version of GTA V. Note the red interior. 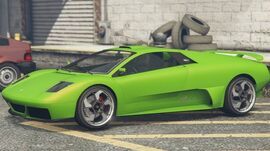 An NPC-modified Infernus outside Los Santos Customs in GTA V. 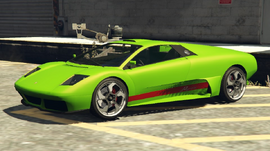 An NPC-modified Infernus in the enhanced edition of GTA V. (rear quarter view) 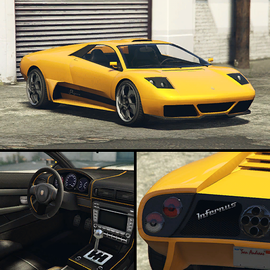 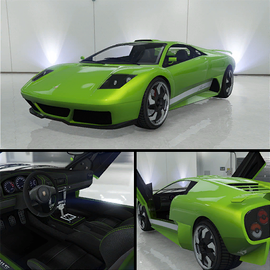 The Infernus on Legendary Motorsport.

The Infernus on the Rockstar Games Social Club. 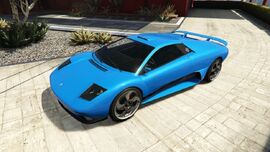 The Infernus on the updated Rockstar Games Social Club. 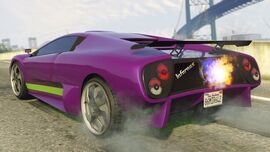 The Infernus in a Cinematic preview on Rockstar Games Social Club

In GTA III, D-Ice is known to own a unique pear-red or metallic blue Infernus. In the mission where the player has to drive it to a garage to defuse a bomb in it, he can save it in a garage, but only by failing the mission. This car is also seen in the mission Grand Theft Auto. 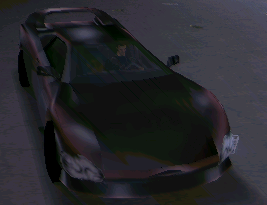 In GTA Vice City, Lance Vance is depicted to be driving a uniquely white Infernus, which can be seen and driven during Back Alley Brawl and Guardian Angels. After obtaining Diaz's mansion in Rub Out, the regular Infernus parked next to the garage will permanently appear white, implying Lance now parks his car there. Given its permanence, the car is easily and always obtainable from this point on.

The White Infernus reappears in Grand Theft Auto: Vice City Stories at Lance Vance's Apartment in Ocean Beach after the mission From Zero To Hero. Other Infernuses can be seen with a similar, but slightly darker color driving around the city. It was later destroyed by members of the Mendez Cartel using a rocket launcher during the mission Light My Pyre, although it still spawns at the apartment after the mission. 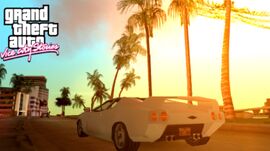 In GTA San Andreas, B Dup has a full immune Infernus. To get it, start the mission Beat Down on B Dup, bring a tractor or Monster Truck (Monster Truck recommended) park it somewhere safe, take over Glen Park like normal, then park the monster or tractor on the road next to the two sidewalk grooves outside B Dup's Apartment. It should flip the Infernus during the final cutscene. After that, push it to a garage.

The Infernus is part of the vehiclemodelset "LS_CUSTOMS_MODDED_SP". This allows heavily modified Infernuses, among many other modified cars to spawn outside Los Santos Customs, as well at other locations. They only spawn in GTA V.