• ­Get the package across the line.

"Prepare to fight tooth and nail for every scrap of progress in Inch By Inch - a new Adversary Mode that sees you competing for possession of a Package and clawing your way through a hail of bullets to reach your team's end zone."
―Rockstar Newswire description

Inch By Inch is an Adversary Mode featured in Grand Theft Auto Online as part of the continuation of the Lowriders: Custom Classics update, released on April 12, 2016, during the Adversary Modes Week event. Two additional maps were made available during the High Life Week event, on April 22, 2016.[1][2]

"Two teams try to get a package across the opposition's line."
―In-game description

Players equipped with various weapons (Pistol, Sawn-off shotgun, Heavy Sniper, and Grenades) must take a package, initially located in the center of the playing area, to the opposite site in less than five minutes. The area is full of elements that function as cover and obstacles. The player who collects the package is prohibited from using any weapon, but they will be instead given an advantage in speed compared to other participants. Each time a packet is successfully taken to the opposite line, the responsible team will be awarded a point. The team with the most points after the given time wins the round.

If both teams have the same score once the time runs out, a sudden death mode will be activated; players who die while in possession of the package will be disqualified, and the round win will be given to the first team to score a point.

If a player is out of bounds, they will be warned through a message to return the area in the next 10 seconds or else they will be disqualified. 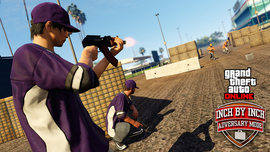 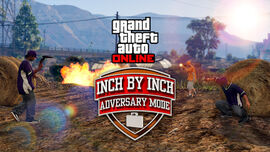 Retrieved from "https://gta.fandom.com/wiki/Inch_By_Inch?oldid=1170165"
Community content is available under CC-BY-SA unless otherwise noted.