The Impotent Rage cosplayer is a minor character in Grand Theft Auto V, appearing as a soapboxer in West Vinewood.

Impotent Rage is a cosplay of the cartoon superhero Impotent Rage, from the in-game television show of the same name. He can be found in front of the Hardcore Comic Store on Eclipse Boulevard.

Each protagonist can have a different conversation with the character, though they generally involve Impotent Rage complaining about his job: 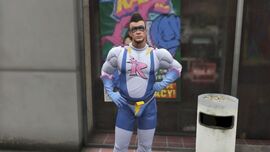 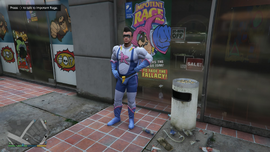