Impotent Rage is a satirical cartoon series that airs on CNT in Grand Theft Auto V. It features the left-wing superhero protagonist of the same name in his adventures.

Impotent Rage is a parody of extreme liberals (much like how Republican Space Rangers and Kung Fu Rainbow Lazerforce are parodies of extreme conservatives). He is very environmental and gets incredibly angry when things don't go his way, causing his body to bulk up immensely whenever angered. Impotent Rage appears to be hypocritical as well, claiming to support poor workers whilst running a huge corporation at the same time. He also enjoys many luxuries.

The character appears to be as popular as Republican Space Rangers and there appears to be a relation between both franchises as they have even had a crossover together. The protagonists can also get Impotent Rage tattoos at local Tattoo Parlors.

He is voiced by Frank Simms.

The episode begins with a factory owner arguing with a picket in front of a Kunt Industries factory, with workers demanding 200% raises, summer Fridays off, massages, snacks and pensions for life after retiring at 37.

While going to work, Impotent Rage notices the incident and arrives to the scene. He supports the workers, much to the owner's anger. After a brief debate, Impotent Rage goes into a fit, killing the owner and destroying the factory. The puzzled workers are left alone after Impotent Rage proclaims "a victory for the working man" and advises the crowd to go on welfare.

A part of a morning show called "Up In The Morning" is shown, which tells about the celebration of a highway closing at Braxton Industries and a suspicion of that Braxton Hunter, the company's CEO, is actually Impotent Rage. The show's host then reads negative responses about Hunter, which claim that "Braxton is a rich entitled asshole with too much time on his hands". After hearing this, Braxton is insulted, but his outrage is interrupted by Violet, his buxom secretary. She hands him an iFruit phone with a voicemail message from Uberman, Impotent Rage's arch nemesis. After that, Violet tells Braxton about her love interest in him, but Braxton didn't hear her as he was busy picking his nose. When he starts paying attention again, a flashback scene about Hunter's past is seen.

After a short discussion about outfits and a small commercial of the cartoon's merchandise, the show cuts to a scene of another picket, this time in front of a natural gas well. The three Texan owners of the well convince Impotent Rage that they are oppressed homosexuals, and the superhero propels the group of protesters into the sky.

Immediately after this Uberman arrives and explains Impotent Rage what did he actually do, before leaving to drill oil wells in sensitive wetlands. Impotent Rage chases after Uberman in his solar-powered Impotent Mobile Electric Car, but it explodes after a small cloud blocks the Sun. The episode ends with Impotent Rage standing among the rubble, wistfully proclaiming "Why must the conservatives always win?". It ends with him clenching his fists as if he were to fly and beat his villains, only for him to actually break down and start crying tearfully. 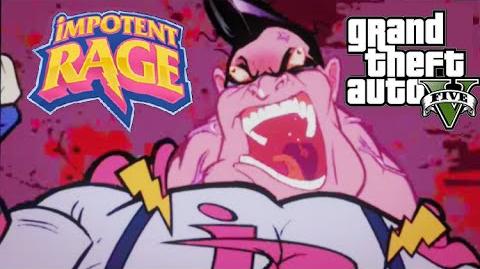 Impotent Rage and the workers in the first episode of his show.

The TV show as seen in Michael's house. The character Violet is seen on the right.

The Cosplay soapboxer at the Hardcore Comic Store, West Vinewood.

Justice Warrior, a painting by Al Alfaro at The Diamond Casino & Resort. 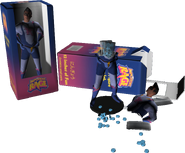 Retrieved from "https://gta.fandom.com/wiki/Impotent_Rage?oldid=1268927"
Community content is available under CC-BY-SA unless otherwise noted.