Standard White - 100%
“Today's muscle cars might look shredded, but we all know the gains aren't real. Deep down they're all juiced-up phoneys with nothing but a short temper and a tiny exhaust. If you want some all-natural brawn, you need go old school. The big block under the Impaler's hood trains by chopping wood, benching peaceniks, and deriding the weak - and there's just no faking that.”
— Southern San Andreas Super Autos description.

The Impaler is a personal luxury car featured in the first Grand Theft Auto and a classic muscle car in Grand Theft Auto Online as part of the Arena War update. It is manufactured by Declasse in the HD Universe.

The Impaler appears to be based on a 1955-1957 Ford Thunderbird, although its name may be a play on "Impala", suggesting it has also inspirations from the Chevrolet Impala (presumably the third generation, due to the square-shaped body and the convertible layout).

The vehicle appears with a continental kit on the back, and may spawn in two variants: with its roof up in Liberty City, and with its roof down in Vice City.

The Impaler assumes a body shape similar to cars like the Buccaneer and the Chino, featuring a large front bumper with rivet details on the upper side, small intakes on the outer sections and the license plate on the center. There is an inset grille-plate on the upper side that bears the Declasse logo on the center and the manufacturer name on the driver side, while the outer sections act as light covers in a similar manner to the Dukes, which move to reveal a set of dual circular headlights. The outer portions of the car have a set of three inner lights and three outer indicators on the edges, along with a painted detail separating the lights and the front face of the car from the rest of the body. The hood has a small protruding detail on the center and pass through the whole compartment towards the windshield, passing between two small intakes located below the wipers.

The sides have a simplistic shape, having a linear formation that separate the skirting area from the rest of the car and traditional doors with square-shaped mirrors. The cabin area is relatively large and features inner pillars on the door windows, together with two separations for the rear-quarter windows. The Declasse logo and the "IMPALER" badges can be seen on the rear quarters of the vehicle.

The rear of the car features a black panel surrounded by a painted detail around, bearing the Declasse logo on the center and the manufacturer name on the passenger side. The edges have a set of three red inner brake lights and three outer red indicators separated in a similar way to the front outer lights. The bumper is flat in appearance and also has rivet details on the upper side, which houses a license plate on the center and two square reverse lights beside it.

The primary color of the car is applied on the body, while the secondary color is applied on the bumpers, the details surrounding the front and rear ends, the grille separations, the door handles, the mirrors and the window trims. A trim color is also available for the interior, being applied on the dashboard, the doors, the seats and the roof. The rims appear to be a derivative of the "Old School" muscle rims seen in Los Santos Customs, but the central detail is smaller and traditional in appearance.

In stock form, the Impaler has access to a fair amount of customization options, and can be modified to resemble it as a lowrider. However, it can be modified into one of the three Arena variants.

The Impaler is a fairly good performing car for its class; having a decent top speed, good handling and moderate durability.

The Impaler possesses good speed and average handling, but has bouts of spinning out if turning a corner too sharply. Durability is fairly good and can take a handful of collisions and gunfire before it starts to fail. In addition, its suspension is relatively bouncy around bumps and curbs.

The Impaler is powered by a single-cam V8 engine, coupled to a 4-speed gearbox in a front engine, rear wheel drive layout. It shares the same engine sound as the Buccaneer.

A Only available at the Arena Workshop.

Liberty City version of Impaler, with its roof up.

Vice City version of Impaler, with its roof down. 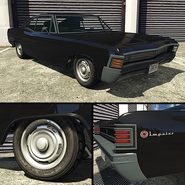 The Impaler on the updated Rockstar Games Social Club.

The Impaler in a Cinematic preview on Rockstar Games Social Club.