Mansion in Beachgate, Broker, Liberty City
A one room apartment in Firefly Island

"The land of opportunity? I'd rather be back in Russia. At least there people don't pretend life has any pleasure."
―Ilyena to Niko Bellic during her random encounter.

Ilyena was born in Soviet Union in 1970. At an unknown point in time, she met and married Mikhail Faustin and they had a daughter, Anna, in 1988. They later moved to Liberty City, settling in the Beachgate area of Broker.

Ilyena first meets Niko Bellic whilst he works for her husband. On one occasion while waiting for Mikhail, she tells Niko of their life before moving to Liberty City, and she explains that Mikhail was a much kinder man back then, in contrast to his unstable and volatile temperament now.

Ilyena appears to be very religious, as she encourages Niko to have more faith and optimism when they discuss souls. Mikhail, however, dismisses her beliefs by calling her a "superstitious old crone". 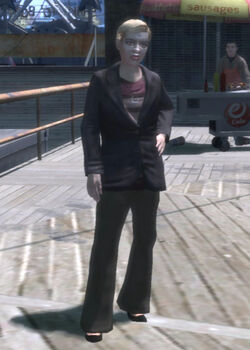 Later, after Mikhail's death, Niko can find her at Firefly Island and she asks him to see Anna's new boyfriend, who is trying to convince her to become a stripper.

Ilyena's portrait in the living room of her home.

Ilyena and Niko talking.
Add a photo to this gallery

Retrieved from "https://gta.fandom.com/wiki/Ilyena_Faustin?oldid=1170061"
Community content is available under CC-BY-SA unless otherwise noted.