View source
watch 02:56
Raise a Floppa - The Loop
Do you like this video?
Play Sound
For the Grand Theft Auto Advance mission, see Ill-Gotten.

“The second haul of high-end goods currently en route to Los Santos' luxury shops and dealerships. We're pleased to announce that the Ill-Gotten Gains Update: Part Two will arrive for all platforms next week, on Wednesday July 8th. This new collection of extravagant attire and potent transportation also includes the debut of the previously PC-exclusive 'The Lab' radio station across all four console platforms.”
— Rockstar Newswire description.

Ill-Gotten Gains Part 2 was the final GTA Online/GTA V content update made available on the Xbox 360 and PlayStation 3; all subsequent title updates are for the Xbox One, PlayStation 4 and PC only (though small software updates were still occasionally released for the original versions of the game).

It was the last update that updated all of its content into GTA V; subsequent updates have their content exclusive to GTA Online with a few exceptions[1]

This update added multiple high-end vehicles and hundreds of luxury clothing items. Two new weapons are available at Ammu-Nation, including the Marksman Pistol and Knuckle Dusters.

A sample of clothes. 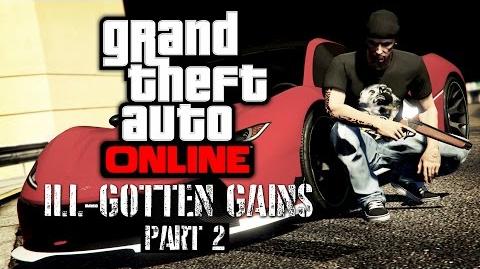