mpluxe
“Due to a surge in high-end crime across southern San Andreas, demand for luxury goods and services is at an all-time high. Upscale merchants of all kinds are scrambling to fill their inventories to serve the newly wealthy. ”
— Rockstar Newswire description.

This update added many luxury-themed vehicles and clothing items. Also, a new weapon, the Combat PDW, and Luxury Engravings for eleven different weapons are now available in Ammu-Nation.

New modifications for weapons - engraved "tints" and engraved attachments for Xbox One, PlayStation 4 and PC only.

The interface for Internet vehicle sites has been updated to include filters and sort options. The main images for vehicles have been changed, as well as the top advertisement banner. Detail view of each individual vehicle now includes up to three images of the vehicle.

The option to display distances using the metric measurement system was also added.

The special shirts found during the Ill-Gotten Gains Event Weekend: Part One. 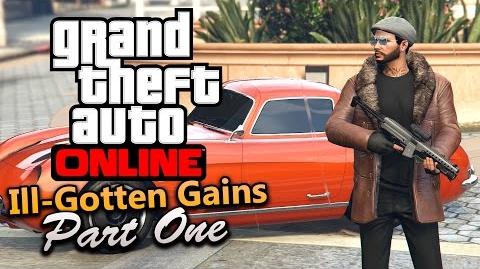