Standard White - 100%
“You want control? You want power? You want one of our sales team to say the words "lithium-ion supercapacitors" over and over while sucking your toes? Good news, Legendary Motorsport's head of customer satisfaction is already making his way to the floor.”
— Legendary Motorsport description.

The Pegassi Ignus is a two-door hypercar featured in Grand Theft Auto Online as part of The Contract update.

The Ignus is largely based on the Lamborghini Sián FKP 37, with additional design cues from other supercars, as well of a few Lamborghini models; the aero parts and some elements of the rear seem to come from the Lamborghini SC20. The headlights are shaped and arranged like the Sián, but has single thin-line LED strips, instead of the Y-shaped ones on the real model, and the main headlight units are taken directly from the first generation Lamborghini Gallardo. The front bumper are similar to the Sián, albeit with more exposed carbon-fibre on the side intakes and the main outer shape of the central intake is inspired by the Lamborghini Huracán STO. The tailights might be inspired by the Rimac Nevera or the BMW i8 (I12/I15). The vents on the hood bear a resemblance to the 2015-2017 Ferrari FXX-K. Similar to the previously released Furia, the Ignus also makes use of dihedral synchro-helix actuation doors, which are a common sight on Koenigsegg cars.

The design of the car is very similar to modern Pegassi supercars such as the Zentorno and the Zorrusso, having a wedge-shaped front end and a sloped rear section. The front of the car makes use of a carbon-fibre section with a painted outline, along with three central intakes with two angled separations. Around the outer edges of the car, there are large sections that are mostly finished in carbon fibre, housing small intakes on the lower area, modern lamp strips on the middle that work as high-beam lamps and circular headlamps on the upper area. The front boot has an inset section that is finished in carbon fibre and bears a long separation and dual intakes, while another carbon-fibre detail spans the lower edge of the windscreen and mounts the corresponding wipers. The manufacturer emblem can be seen on the front of the boot.

On the sides, the car features amber indicators and small fins continuing from the front end, while the upper portions of the front fenders feature carbon-fibre strips continuing from the headlamp housings and have various exit vents on the rear portions. The middle area feature carbon-fibre side skirts with small fins on the front and rear edges, as well as an inset area on the doors with carbon-fibre details on the frontal section and sleek rear-view mirror wings with carbon-fibre details. The rear fenders also have carbon-fibre strips with small exit vents, along with larger vents near the rear wheels, amber indicators on the rearmost end, and large carbon-fibre fins with painted borders. The glasshouse area makes use of black trim around the windows and carbon-fibre details between the windows and the bodywork, which lead towards the engine bay. The rear section is mostly predominated by the engine compartment that has a large window on the centre and thin vents beside it. Said compartment hinges from the front and opens to reveal the engine bay with protective cross frames, carbon-fibre panels around, rear cockpit wall and suspension shocks/springs. Right after the engine compartment, there is a functional active spoiler, similar to cars such as the T20, the Nero and the XA-21, which only works when no spoiler modification is installed.

On the rear end, the car has dual red strips on either side, with the outer portions working as the main lamps and the inner portions as the brake lamps. Around the middle section, there are dual exit vents below the tail lamps, a central section for the number plate and two additional vents beside it, fitted with trapezium-shaped exhaust housings. The bottom area features a black diffuser with seven blades, while its underside is mostly carbon-plated, with the gearbox/differential exposed. Its interior is the same from cars such as the Nero, the Tempesta and the XA-21, with the Pegassi logo visible on the horn cap and the badging behind the seats. A small window provides vision to the engine bay.

The primary colour of the car is applied on most of the bodywork, the details around the engine and the interior stitching, while the secondary colour is applied on the details beside the headlamp housings and on the fender vents, and the outlines of the front end, side skirts, wheel arches, rear diffuser, and rear fins. Although not accessible, a trim colour is also available for the dashboard, horn cap and part of the doors, which is always set to black on purchased examples. It uses a set of 10-spoke dual rims, alternating between larger spokes with a painted finish and smaller ones with a black finish. The outer lines and large spokes can support a dedicated colour, although only naturally-generated examples may have one.

The Ignus is powered by a V12 engine whose model is derived from cars like the Infernus Classic, the Torero and the Toros. It is coupled to a 7-speed gearbox in a mid engine, all wheel drive layout (48.5% front, 51.5% rear distribution), and uses the same engine sound from cars such as the T20, the Tempesta and the Zorrusso.

A green Ignus shown in the update’s promotional artwork. 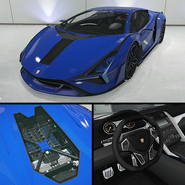 The Ignus on Legendary Motorsport.

The Ignus in the cinematic preview on GTA Online Rockstar Games Social Club. 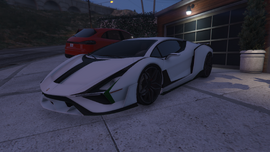