If the Price is Right

If the Price is Right

If the Price is Right is one of the final storyline missions in Grand Theft Auto IV, if the "Deal" ending is chosen.

Pegorino orders Niko to pick up the payment for a heroin deal, part of a partnership between the Pegorinos and Dimitri Rascalov. After many texts from Roman begging him to do the deal, Niko accepts and comes to the conclusion holding grudges is foolish and so he goes with Phil Bell to the exchange point.

Dimitri calls Niko to say that he has killed the buyers' representatives, and will keep the heroin for himself. Unfortunately, Niko and Phil are already in the buyers' compound. Believing they will not be able to escape the territory of the newly betrayed buyers without a fight, the pair decide that they will steal the money.

A massive gunfight ensues in the buyers' warehouse HQ, followed by a car chase when one of the buyers escapes with the money. They kill the dealer then take the cash from him; Niko then drives Phil to his hideout in Tudor and takes a cut of the cash. After this Niko cuts his ties with Pegorino.

Head to the green "Deal" icon on the map. Niko meets up with Phil from his apartment in Tudor, and he'll tell Niko that they are going to Port Tudor. Go to the docks. On the way Phil explains the plan; Dimitri is going to hand over the heroin to the buyers while they collect the cash. Head inside the docks. Dimitri then calls Niko and tells him that he has killed the guys collecting the heroin and suggests that Niko and Bell break into the compound and collect the money off of them anyway. Niko then tells Phil and Phil says if they're fighting, they're fighting for the money. Follow Phil. He will climb to the roof of the warehouse and shoot the glass of the skylight.

Jump into the skylight and immediately gain cover. Steal the money from the office. The warehouse is crawling with goons. Wipe them out. Use the SMG and Sniper to pick off some goons, then carefully go down the stairs eliminating any goons in sight. Cover Phil if he is in danger. Continue on and gain cover. Eliminate a couple more goons and go down the stairs to ground level. Follow Phil into the office.

Gain cover behind the truck on the right and kill the rest of the goons on the ground. An assault rifle would be helpful in this situation. Jump over the scaffolding in the middle of the warehouse and go up another set of stairs. Cover Phil as you get closer and closer to the cash room. Once the area seems quiet, run down to the money room. Cutscene. A goon escapes with the money.

Chase after the buyer. Turn left and there will be a pickup truck and a dirtbike. It is advisable to take the pickup truck, as there is a serious and constant risk of crashing if the dirtbike is taken. Wait for Phil. Then chase after the buyer. Shoot the truck repeatedly. Kill the buyer. Collect the money. Take Phil back to Tudor. Niko receives a $250,000 cut from the deal. Roman is happy that Niko has seized such a fortune, and that he has put Dimitri's betrayals behind him; Kate, however, is not happy that Niko took the money, and refuses to come to Roman's wedding. 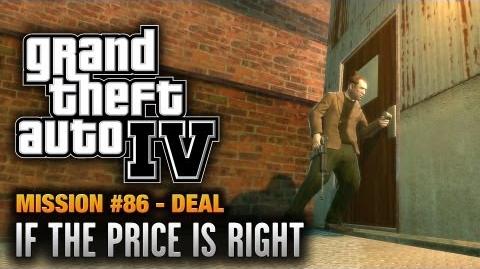 Roman: You did that deal?! You worked with Dimitri?! That's great, Niko!

Niko: Yeah, maybe it would have been if he hadn't screwed me over and nearly gotten me killed.

Roman: But he didn't get you killed. You got the money and you survived. We will celebrate at the wedding reception. Cheer up, Niko!

Niko: Alright, Roman. Today is your and Mallorie's day. I will be happy for you both.

2.Jimmy: We're back on top, Niko. The Pegorinos is still somebody. Phil's bringing me the taste of the cash and Dimitri's still got hold of the horse. This is perfect!

Niko: I hope your partnership is a fruitful one. Good luck and goodbye.

Jimmy: You 'been a useful set of hands. Look after yourself.

3.Niko: Hey, Kate. I decided to work with that guy. I don't know if it was the right decision, but I did it. He screwed me over again.

Kate: You see, Niko? You should have gone with your instinct not to trust him. I can't believe you could care about money that much.

Niko: Well, we do what we can to survive, Kate. Are you coming to Roman's wedding?

Kate: I don't think so, Niko. I don't want to be around you right now.