In-game time
“What you're gonna do is disguise yourself as an Albanian and then go whack Frankie Garone, an Ancelotti long time capo.”
— Gerald McReary

I Need Your Clothes, Your Boots, and Your Motorcycle is a mission in Grand Theft Auto IV given to Niko Bellic by Gerald McReary.

Gerald wants Niko to chase and assassinate a Ancelotti capo named Frank Garone while in disguise as an Albanian gangster to create even more trouble between the two gangs. He reveals a dead Albanian gang member stuffed in his fridge. He asks Niko to wear the gang member's outfit to fit in. Niko uses the Albanian's PCJ-600 to do the job.

Niko takes the bike and rides over to Star Junction where Frankie Garone is having a meeting with an Albanian. Frankie has already beaten him up and spots Niko before fleeing on his bike. Niko chases Garone through the streets before eventually killing him. 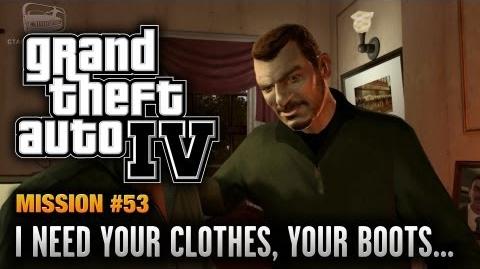