• ­Take your friends back to Northwood.

• ­Go to your apartment.

I Luv LC is the opening mission for The Ballad of Gay Tony. The first cutscene of the mission intertwines with the robbery of the Bank of Liberty involving Niko Bellic, Patrick McReary, Derrick McReary and Michael Keane.

During a bank robbery in a Bank of Liberty branch in Chinatown (as depicted in detail during "Three Leaf Clover" in Grand Theft Auto IV), Eugene Reaper discusses his dangerous idea of fighting back against the bank robbers with Luis who was at the bank for his boss, Gay Tony. Luis dismisses the idea, but Eugene goes along with it, fatally shooting Michael and getting killed himself. Luis escapes alive and heads over to Tony's, where he first meets Rocco Pelosi and Uncle Vince, who comes to collect some money Tony owes him. Afterwards, Tony and Luis leave for the clubs. Luis later meets his friends Armando Torres and Henrique Bardas and drives them home, before going home himself. 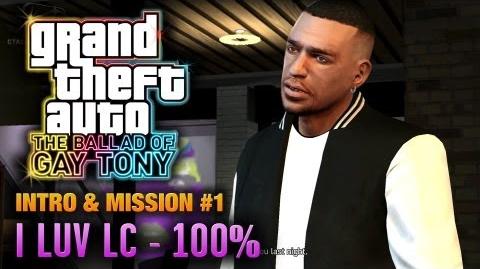 Gay Tony leaving the club with an unknown man.
Add a photo to this gallery

Retrieved from "https://gta.fandom.com/wiki/I_Luv_LC?oldid=1272662"
Community content is available under CC-BY-SA unless otherwise noted.