View source
watch 02:56
Raise a Floppa - The Loop
Do you like this video?
Play Sound
For the real life smartphone application, see IFruit App.

iFruit is a line of smartphones designed and marketed by Fruit Computers, in the HD Universe. It is an obvious parody of the Apple iPhone.

The 3G has few functions and is described as "All ego".

The 8 is identical to the 9iX apart from the absence of Shelley.

The 9iX can be used to snap pictures with Snapmatic in-game and upload them to the social club. The phone also has other apps. In addition to the Snapmatic app there is email, texts, checklist/job list (online), quick save, contacts, settings, internet, and Trackify (only available on a mission).

iFruit's main competitor as of 2013 is Drone. In GTA Online: The Contract, it was revealed that bitterSweet phones held a mass-market share until they were displaced by iFruits, but held a chance to become competitive once more with a relaunch in 2021.

It is a touchscreen-based smartphone developed by Fruit Computers. It is based on the iPhone 4S and on iPhone 5C in the enhanced edition of GTA V. It makes its debut appearance in Grand Theft Auto V.


The player is able to take in-game pictures using the iFruit and upload them to the social club.

It is a touchscreen-based smartphone developed by Fruit Computers. It is based on the iPhone 4S. It makes its debut appearance in Grand Theft Auto V.

It is a touchscreen-based phone. It has very few functions. It was very popular due to being a Fruit Computers product. It makes its debut appearance in Grand Theft Auto IV.

Periodically, the player will receive emails from various characters, or even companies promoting new items in stores. For some personal emails, the player can choose to 'reply' to the sender, and a scripted message from the protagonist will be sent, advancing the conversation. Emails from retailers sometimes come with a link that can be opened in the browser.

The text messaging function of the phone allows the player to receive texts from various characters. Viewing a text usually prompts the player to call the sender, often to advance a part of the story or to trigger a mission.

Shows the mission objectives (when playing on a mission);

Shows a list of the last GTA Online missions invites for quick access, even if the player is in the story mode (only when connected to the internet).

Allows the player to save the game when not in a safehouse. Quick saving is not available during missions.

Standard contact list used to call or hang out with people. If the player has ignored an incoming phone call, the icon will be replaced by a (!) indicating who to call back to start a mission. Pressing X (Xbox 360, Xbox One) or Square (PS3, PS4) while in the list will show the dialer.

Allows the player to modify the phone to their tastes. Can use different ringtones or toggle phone vibrations on or off.

Allows the player to take pictures or selfies in free roam which are then uploaded to the Rockstar Games Social Club. Several missions also require photos to be taken of specific things. It is based on the photo and picture editing app Instagram.

Standard mobile browser allowing the player to navigate the internet, buy vehicles online and manage stocks on the BAWSAQ website.

Used to track down signals from the player's phone. Can be used from a very long distance, up to a few miles. Available only in a couple of missions or in the Submersible side missions to find toxic waste.

An AI programmed into the iFruit OS. Shelley is used to give directions, advice, etc. However, she cannot be used by the player. Shelley is based on Siri.

iFruit has a warehouse at Port Tudor in Alderney. 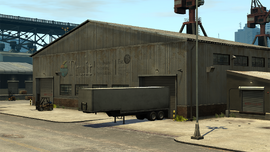 A iFruit 3G Advertisement on banditmagazine.net in TLaD.

Beach Girl with an iFruit 9iX.

Lamar's phone that was thrown by Franklin during Chop. 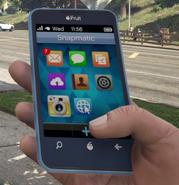 Back side of the iFruit 9iX.

Advert for the iFruit 9iX. 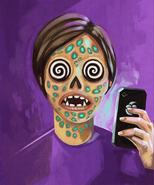 Stay Connected, a painting by Jo Germain at The Diamond Casino & Resort, the man was featured, with a Blue Hypnotic Alien mask-like face, holding an ifruit Phone.

Essentials, a painting by Martin Miller at The Diamond Casino & Resort, with a bunch of the iFruit logos spreading around the painting.

She's an Angel..., an artwork by Kircher at The Diamond Casino & Resort, which is similar to the artworks by Roy Lichtenstein.

He Loves Me?, an artwork by Kircher at The Diamond Casino & Resort.