GTA Wiki
Register
Don't have an account?
Sign In
Advertisement
in: Landmarks, Locations, Locations in GTA V,
and 13 more
English

The skyscraper as seen from the east.

The building is located on the corner of Power Street and Swiss Street in Pillbox Hill, Downtown Los Santos, right next to the Federal Investigation Bureau Headquarters. The skyscraper is the third tallest structure in Los Santos after the Maze Bank Tower and the Mile High Club, and is almost identical in height to the FIB Headquarters.

It is based on the Two California Plaza, a 751-foot (229 m) skyscraper in Los Angeles, California.

The IAA and FIB buildings are both government run agencies and are similar in design both in the interior and exterior of each skyscraper. The building has a total of 53 floors and most likely possesses similar features to the FIB building, such as restricted and high-security areas in the highest floors. The rest of the building is most likely made up of offices. A large number of offices can be seen in Three's Company, as well as the 36th floor, which has a "Legal Affairs" section and a few offices.

Part of the inside of the building (36th floor) is seen in the mission Three's Company, where Michael De Santa, Trevor Philips and Franklin Clinton are forced by FIB agent Steve Haines to perform an abduction against the IAA in order to boost the funding for the FIB. During the abduction, Karen Daniels is seen torturing and beating Ferdinand Kerimov, which implies she is working for the agency as a lead interrogator.

One of the 15 Knife Flights needed to attain 100% Completion needs to be performed between the IAA Headquarters and the FIB Headquarters.

The IAA facility is infiltrated during the The Agency Deal. Miguel Madrazo enlists KDJ's help to broker a deal with a crystal vape dealer. However, the dealer betrayed them and sold the formula to the IAA instead. 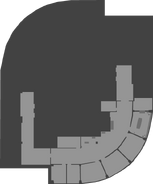 View of the interview room.

View of the hallway.

General view of the facility grounds.

View of the hallway.