Standard White - 100%
“It's time to look to the future, but you need to take things slow. World Peace? No thanks. Universal healthcare? Gtfo. An SUV that's all electric? Alright. It's a start. The forward-thinking Obey I-Wagen: there's an inch of ozone with your name on it.”
— Southern San Andreas Super Autos description.

The Obey I-Wagen is an electric four-door mid-size crossover SUV featured in Grand Theft Auto Online as part of The Contract update, released on January 20, 2022, during the I-Wagen Week event.

The I-Wagen is heavily based on the 2018 Audi e-tron SUV, with some styling cues from the second generation Audi Q5; notably the grille and headlights are derived from the facelifted models, while the tail lights are from the pre-facelift models. Similar to the Tailgater S, the headlight setup may be inspired by the signature Thor's Hammer headlights seen on modern Volvo passenger cars.

The front end of the vehicle features a narrow mesh intake that spans about half the car's width and has silver/chrome trim around and a central number plate in front of it, followed by smaller intakes on the outer edges that also have silver/chrome trim around. Slightly above the central intake, there is a large mesh grille that bears silver/chrome trim around and the Obey logo on the upper side, while the sections between the grille and the outer intakes have inset formations. Beside the upper edges of the grille, there is the headlamp sets, consisting of dual LED-like units, modern strips and small outer indicators. The bonnet has curved lines starting from the inner edges of the headlamps and then leading towards each side of the windscreen, opening to reveal a plastic cover and small vents in the centre.

On the sides, the vehicle has flared fender arches and distinctive shapes for the skirt area, while the doors have additional body lines starting from the headlamps and leading towards the tail lamps, together with horizontal handles. The cabin area makes use of silver/chrome trim around the side windows and black inner pillars, while the roof has a sunroof on the front area and a small spoiler above the rear window. A set of mirror wings can be seen on each side of the front doors, which have painted sections on their upper halves.

The rear of the car consists of a large compartment door that bears the Obey logo in the centre and a dedicated section below for the number plate. The tail lamps are located in plastic housings and have a similar layout to the headlamps, consisting of outer indicators and dual main units on the edges, and dual brake units on the compartment door. The bumper area is relatively simple and bears a distinctive formation on the upper side, while the bottom bears silver/chrome trim and a grey section in the centre. The underside of the vehicle is mostly covered by a large plate with circular vents.

The interior of the vehicle is similar to vehicles such as the Cavalcade, the BeeJay XL and the Granger. However, it uses the same dials from cars such as the Raiden, the Neon and the Imorgon.

The primary colour of the vehicle is applied to the bodywork and the upper portions of the mirror shells, while the secondary colour is applied to the interior stitching. It uses a set of five-spoke rims with bolt details around the centre, wrapped in medium-profile tyres.

The vehicle is powered by an electric battery, providing direct transmission to all wheels (52%-48%, front to rear torque distribution). Being an electric vehicle, it has a very low sound, only heard in quiet areas and with the radio volume off. 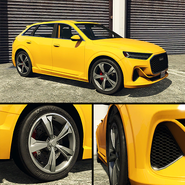 The I-Wagen in the cinematic preview on Rockstar Games Social Club.