I'll Take Her is a mission in Grand Theft Auto IV given to Niko Bellic by Gerald McReary.

This mission is considered a two-part mission, with the continuation mission, "Ransom", being unlocked at a later point.

In order to complete the mission the player must:
I'll Take Her...

Gerald McReary has recently been sent back to prison for racketeering offences, and he phones Niko Bellic and requests that Niko meet him at the prison.

During the visit, Gerald instructs Niko to phone Patrick McReary outside, who instructs him to kidnap Gracie Ancelotti, the daughter of Ancelotti Family Don Giovanni. In order to do so, Niko contacts Gracie in response to an advert she placed online, advertising her car for sale. Niko books a viewing and arranges to meet Gracie the following day.

The following day, Niko arrives at Gracie's house in Alderney and takes the car for a "test drive". During the test drive, Gracie flirts with Niko, until halfway through the drive, Niko turns the car around and informs Gracie that he is kidnapping her.

Gracie attempts to phone her father, but Niko snatches her phone from her and throws it onto the road. During the drive to the building where Gracie will be held hostage, Gracie grabs the steering wheel multiple times in an attempt to throw Niko off course or will eventually try to escape, forcing Niko to keep her in the car, until Niko eventually punches Gracie, knocking her unconscious.

After reaching the hideout, Gracie is led inside by Gordon and tied up in an upstairs room. Another man drives Gracie's pink Feltzer away, while Niko phones Packie and informs him that Gracie has been transported to the hideout.

The reward for completing this mission is $9,500, and the mission Ransom is unlocked. 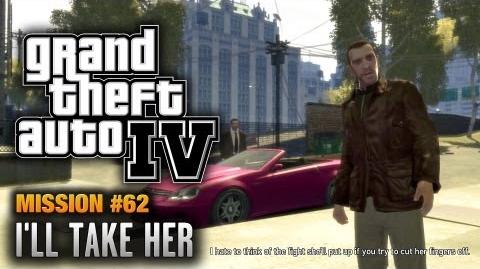