Standard White - 100%
“These British jets have been decommissioned for twenty years, but who cares when you've got vertical take-off capabilities and rockets up the wazoo. The billionaire action movie enthusiast's toy of choice.”

The Hydra is included in GTA Online as part of the Heists Update. Like the GTA: San Andreas rendition, the jet is based largely on the British Aerospace Harrier II; however, the nose, vertical fins, and horizontal stabilizers resemble those of the F-35 Lightning II. The B variant is utilized by the US Marines and is the STOVL (Short-take off and Vertical Landing) / VTOL (Vertical Takeoff and Landing) version. The Hydra's cockpit resembles the General Dynamics F-16 Fighting Falcon, especially the integrated control panel below the HUD, which is directly taken from that of the F-16. The Hydra's air intakes are from the AV-8B, as well as the side air holes and the four rotatable exhaust nozzles. In fact, the entire VTOL system of the Hydra is still based on the AV-8B Harrier II, rather than the F-35B's Lift Fan System, two steering nozzles and rotatable "Lobster Back" exhaust for its main engine. The jet retains its Vertical Takeoff and Landing capabilities, allowing it to be flown in a hover mode akin to a helicopter, or flown as a plane. These modes can be changed on console by pressing right on the D-pad. The Hydra in GTA Online is utilized by the United States Navy. 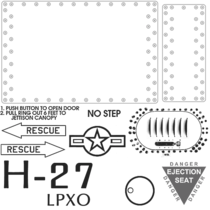 Similar to the GTA San Andreas rendition, the Hydra is able to switch between vertical and horizontal flight. When in horizontal flying mode, the Hydra has the highest top speed in the game, around 160 knots while under 900 MSL, and approximately 210 knots while higher than 900 MSL. However, the Hydra is relatively heavy thus has slightly slower acceleration than the Lazer, and when performing a vertical climb, the Hydra will start to lose speed and eventually stall out, unlike the P-996 Lazer which will continue to gain altitude. The Hydra has acceptable maneuverability, being able to quickly pitch, yaw and roll in any direction, however, due to the Hydra's extra weight, it is one of the least maneuverable jets, only beating the V-65 Molotok in a tight circle.

When in VTOL mode, the Hydra is surprisingly less maneuverable than its previous rendition; the Hydra is easily controllable in this mode, but has difficulty pitching downwards to engage targets, and has trouble correcting its momentum. It has a tendency to continue moving in the direction it was traveling if switched into VTOL mode, and also takes a while to ascend and descend in the same mode. The VTOL capabilities make using the vehicle's weaponry much easier, but it is a double-edged sword; it is not as maneuverable as a helicopter and responds to inputs differently. It is difficult to slow down from flight mode into hover mode and the throttle must be constantly modulated, otherwise the engine will cut out if the Hydra is close to the ground. If slowed down to the point that the main engine shuts off, switching to VTOL mode and accelerating will not start the engine, preventing any thrust coming through the nozzles, and the plane will plummet to the ground. One should be careful when using the Hydra in VTOL mode to attack target, since it also makes the Hydra much more vulnerable to direct fire and leaving very little chance of dodging RPG's and locked-on Homing Missiles. Also, when switching to flight mode, the Hydra may lose a small amount of altitude before it takes flight, therefore it is not suitable to change to Jet mode mid-air while very close to the ground or near buildings. If the Hydra plummets to the ground with retracted landing gears, there's an opportunity to change to VTOL mode if the player reacts quickly before it results in an imminent crash. This problem is negated if the Hydra is flying forward while it transforms to flight mode. It also suffers from the Lazer's tendency to wobble in flight due to turbulence, as well as its unresponsive controls if the afterburner is not engaged.

Overall, the Hydra can be considered as a VTOL counterpart to the Lazer. Its finicky performance in VTOL mode is realistic; VTOL aircraft is not like helicopters and, while able to, are not designed to operate in hover mode, only for takeoff and landings. Despite being a little heavier, the VTOL features make the Hydra a very deadly aircraft with its weaponry (if players take the time to learn its unique quirks), which is partially balanced by not only its price, but also by the fact that the vehicle is not available outright to players in GTA Online. However, as of the Cunning Stunts: Special Vehicle Circuit update (enhanced version only), the Hydra can be purchased outright, albeit at an even greater price.

Upon being converted into a personal aircraft, the Hydra can be repainted with just a primary color for the entirety of the vehicle, excluding the vectoring nozzles and the intakes. The nose and wing armaments will only be slightly tinted. The digital camo livery will be also removed, causing it to have a more uniform color.

In flight with its thrusters directed backward 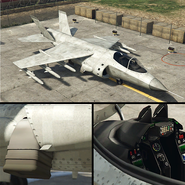 The Hydra on Warstock Cache & Carry.

The thrusters of the Hydra directed backward.

Rear-view of the Hydra.