"Don't worry, the confusion is natural. You see that running board swooping low over the front wheels, that high-set radiator grille, the holder for your cigarette holder, and you're safely back where you belong in the 1920s. But then you see the carbon steel reinforcements to the chassis, the turbo charger and the bullbar, and you're somewhere else altogether. Don't try to make sense of it. Just let it do what it needs to do."
―Legendary Motorsport description.

The Hustler is one of the oldest cars available in the game, based on a 1933/1934 Ford 'five' window coupe. It is mildly modified, but not the extent of the Hotknife.

The Hustler returns assuming a very similar design. It is still based on the 1933 Ford Coupe in the middle and rear design, but the front is now based on the 1932 Ford Coupe. It shares its interior with the Roosevelt, however the dial needles are shared with the Dukes, which are thicker, yellow arrowed needles, rather than the btype standard red needles.

The Hustler has a decent acceleration, but excellent top speed, owing to its high-output engine. It has remarkably good handling capabilities for a vehicle of its age and weight; It corners sharply, but suffers from some oversteer at high speeds. The Hustler has a pretty good ramming ability in contrast to its size.

The Hustler can only be modified in a TransFender garage. 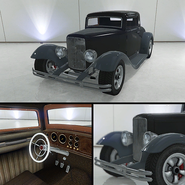 The Hustler on Legendary Motorsport.
Add a photo to this gallery

Retrieved from "https://gta.fandom.com/wiki/Hustler?oldid=1050235"
Community content is available under CC-BY-SA unless otherwise noted.