For vehicles with similar names, see Huntley or Huntley Sport.
“Merging the style and craftsmanship of a classic English luxury motorcar with the feature set of a high-end SUV, the Huntley S might be the only example of British-American fusion that actually works.”

The Huntley S is based on the Bentley EXP 9 F concept SUV, seen in the general profile and the four-door layout, although the front end features a bumper design inspired by those found on Bentley models post-2010. The sides are heavily influenced by the Range Rover Evoque.

The front bumper of the car features one continuous main duct that spans almost its entire width, followed by a smaller intake below it and a square-shaped meshed grille. A set of dual circular headlamps with an LED surrounding can be seen, as well as light strips on the main duct. The bonnet bears the manufacturer emblem on the front.

The sides are distinctive by the bulky portions around the wheels and lower side, with a ridged lower section acting as side steps. The cabin features black A, B and C pillars, with the rear-view mirrors being depicted with a black lower half and a coloured upper half. The roof area has variouns ridges running along the car and a roof spoiler can be seen above the rear window.

The rear end features a large compartment door with a small extension below the window, bearing the silver lettering displaying the manufacturer name. The central area features a small space for the license plate and two black details on either side. A set of vertical lamps can be seen next to the compartment door, while the lower area features a vent similar to the front duct, with reverse light strips on it. Below it, a black diffuser and chrome dual exit exhaust tubes can be seen.

The Huntley S uses the "Feroci" dials and interior, and it is shared with vehicles like the Habanero and the Serrano.

Most of the car's body is painted with a primary colour, while the front portion, grille/hood area, integrated side steps, side stripes passing over the door handles and above the tail lamps, and the roof and spoiler are painted in a secondary colour. The stock rims appear to resemble the "Split Ten" high-end rims available in Los Santos Customs, sharing the circular portion behind the spokes. However, one difference is that the centre part of the wheel is surrounded by small mouldings created by the spokes.

The Huntley S is one of the fastest SUVs in the game. Its handling is average among the SUV class, being similar to the Rocoto as well as others, but still being beaten by the Radius. Even though it posses one of the highest acceleration times in its class, and one of the best top speeds among any 4-door SUV, the Huntley is still slower accelerating than the Baller, and the Serrano and Radius are still the fastest in the SUV class. Therefore, the Huntley S gets highly rewarded by the customization available at Los Santos Customs, due of the acceleration based upgrades. It is also highly durable and can resist a lot of shots and collision damage, especially with armor fitted at Los Santos Customs.

Unlike the previous Huntley and Huntley Sport, the Huntley S does not handle very well off-road, as it is primarily designed for luxury transport and smooth driving.

The car is powered by what is stated to be a high-revving V6, although it has an Inline-4, fitted with a modeled Turbocharger by default (similar to the Seminole, Habanero and Dubsta 6x6). Note this will not effect performance, and is purely cosmetic, unless the player purchases a Turbo modification at Los Santos Customs.

Pre-release screenshot of the Huntley S.

A Huntley S spawning outside Los Santos Customs in the enhanced version of GTA V. 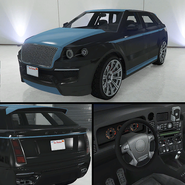 The Huntley S on Legendary Motorsport in the enhanced version of GTA V.

The Huntley S on the updated Rockstar Games Social Club.