GTA Wiki
Register
Don't have an account?
Sign In
Advertisement
in: Gameplay, Features, Features in GTA V,
and 4 more
English

A buck about to be shot by Trevor.

In-game time
“Hunters and adventurers can find great sporting challenges across our vast Blaine County countryside. Bring a rifle to hunt for dangerous game, hike to the peak of the majestic Mount Chiliad, or hire a plane and parachute from on high.”

Hunting is a side-activity featured in Grand Theft Auto V. It can only be accessed by Trevor Philips between 5:00 and 21:00.

The hunting activity appears to be based on the one featured in the 2010 open-world western Red Dead Redemption, another game made by Rockstar Games. The hunting activity takes place in a single location in Blaine County, the Chiliad Mountain State Wilderness. Although wildlife can be encountered in many other locations, and optionally killed by the player, only in this one location can Trevor earn money and points for doing so.

Hunting is available after Trevor meets Cletus and completes his second mission "Fair Game". After starting the hunt, by finding the appropriate icon on the northwest side of the map that looks vaguely like an elk head, and entering the trailer at this location, Trevor is equipped with the animal call that Cletus gave him in the intro mission and also has unlimited sniper ammo for the duration of the hunt. He also automatically wears the hunting outfit given to him after "Fair Game". After this, the player can wear the Hunting outfit at their leisure when playing as Trevor by equipping it at Trevor's wardrobe at his safehouse.

Each kill must be photographed and sent to Cletus using Trevor's smartphone. Cletus will then send money based on the type of animal killed and how it was killed. Heart shots, neck shots and headshots earn the player extra points and money which will help one move toward higher medal rankings for a single hunt. A Blazer is available outside the trailer. Hunting is available from sunrise to sunset. Cletus will send the player a warning text when time is almost up and a final text when hunting is over for the day and then return to the trailer.

Animals known to be hunted:

There are also challenges that the player can perform during the hunting, to increase the score and get the gold medal more easily. The challenges are divided in three categories:

Trevor hunting with a hunting rifle. 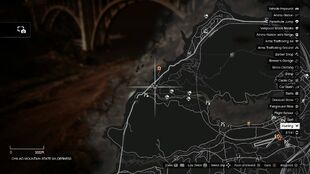 Location on the map.

The medals unlocked for completing challenges. 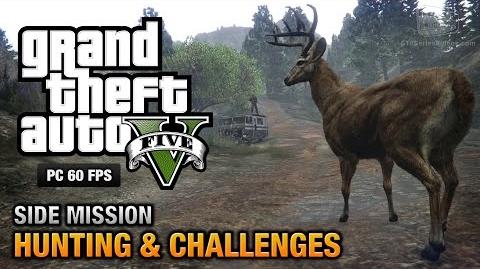