"The Hunter is nature's little way of telling someone that they're about to have a hundred rounds of heat-seeking freedom launched into their way of life. With space for more mass destruction than anything in its class, this thing has been responsible for delivering more kilotons of democracy than any other attack helicopter on the planet. So if it's brand recognition you're after, you just found it.
Please note: This aircraft is excluded from Pegasus Lifestyle Management and must be stored in a personal hangar."
―Warstock Cache & Carry description

The vehicle does not officially appear in Grand Theft Auto V, however it does appear during the movie Meltdown and can be seen fully detailed, with a very similar design to its original 3D Universe rendition.

The Hunter is modeled after the aforementioned Apache with various elements from the Boeing–Sikorsky RAH-66 Comanche. On the front, the nose of the Hunter features two sighting units modeled after the PNVS (Pilot Night Vision System) and the TADS (Target Acquisition and Designation System) on the real Apache, albite the TADS is missing several camera and FLIR windows and features only a small camera/FLIR window and rest of its 3D Universe predecessor, while the canopy now resembles that of the RAH-66 Comanche. The Hunter's front suspension is raised in order to fit the Hughes M230 30mm chain gun mounted on the chin of the craft's fuselage when grounded and is equipped with four Hydra 70 rocket pods, while lacking the 8 AGM-114 Hellfire missiles. On the back, the tail boom is briefly seen and the entire tail is modeled after the RAH-66 with the "fantail" rotor fans instead of the four scissor blade tail rotors from the Apache. The two tiny vertical stabilizers on the horizontal stabilizer also copied the Comanche, as these were later added to the RAH-66 prototypes to stabilize it in flight . As an additional note, the engine compartments appears to be modeled after the ones of the Apache, but the exhausts were changed with horizontal vents instead of vertical. In the same trailer, the pilot is seen piloting the helicopter in the co-pilot gunner seat, like in previous renditions.

Unused police scanner audio and sounds exist for a vehicle named "Hunter" within the game's files.[2]

"Calling the FH-1 Hunter an attack helicopter might be misleading, because this thing is in a class of its own. Its unique rocket barrage alone is enough to eviscerate an army of foes, and that’s before you consider your buddy's contributions at the helm of the gunner-operated Turret. Can you hear it? The sweet cacophony of exploding aircraft and Homing Missiles whizzing through the sky. Your enemies should be so grateful."
―Rockstar Newswire description.

Compared to the beta model, the interior appears to be completely redesigned, featuring a glass cockpit with multiple screens for both occupants and small lens that are presumably part of the camera system (as they are the same as the camera lens seen on the nose of the vehicle). The screens are purely aesthetic, and do not display real flight information. The cabin features top-hinged access doors on both sides, rather than just on the right side. 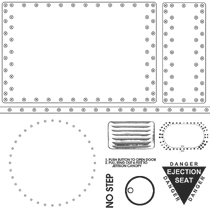 The Hunter is, in all of its appearances, the fastest helicopter in the game. It possesses a stellar handling and is easy to control, as well as being a good choice to fly between structures in cities. However, it has a wide turning radius and cannot automatically stabilize at 45 degrees when keeping the control thumbstick forward, as doing so will result in the Hunter going upside down, losing control and eventually crashing. The helicopter can easily get upside down when moving it at high speed.

The Hunter has two sets of weapons, which consist of a chain gun mounted on the chin, and dual rocket pods. This weaponry makes the Hunter a deadly vehicle. The chain gun is autonomous and will automatically lock/fire at targets in a 45 degrees radius. The rocket pods will fire two rockets (one from both sides) at once. These are unguided, but the high rate of fire of the rockets and the good handling of the helicopter make the rockets easy to use and devastating. Like the Rhino, the Sea Sparrow and the Hydra, all weapons have unlimited ammunition.

According to the files, its machine gun had almost the same properties as the Savage's front gun, with the same explosive rounds, same fire rate and same range.[3] The rocket launchers could have been the same as most aircraft rocket launchers, since most of them are shared weapons.

The Hunter is very nimble, with superior maneuverability to the Buzzard. It is also very fast for a helicopter of its size, matching the speed of the Volatus. Similar to the Savage, however, the helicopter has relatively large rotor blades and therefore can be difficult to land in tight spaces. The rotors may also cause the vehicle to flip erratically if caught for too long, in the same way the Savage behaves with blade-contact.

Like the Cargobob and the Savage post-Smuggler's Run, the Hunter is able to withstand a single explosive without being destroyed, although its engines will still be damaged. Just like every other helicopter, the Hunter will only be able to fly for approximately two minutes and twenty seconds before the engines are shut down, assuming no further damage is sustained. The Hunter is still very durable, as it can withstand five shots from a Heavy Sniper Mk II with explosive rounds, detonating on the sixth hit, and will explode after being hit by three rockets from a Homing Launcher, RPG, or other sources of explosive damage. Just like any other aircraft with armor upgrades, the Hunter is very resistant to bullet damage and will be destroyed after eighteen shots from the Heavy Sniper.

The occupants are rather safe from gunfire, mostly because the cabin windows are not very large on the front and the sides, though the upper side may be a flaw in this aspect. One aspect of concern with the helicopter is the engines are very large, which make them more likely to be hit by enemy fire. These large engines are a weak point for the helicopter, taking increased damage if shot there.

Hunter in Grove Street in Grand Theft Auto: San Andreas.
Add a photo to this gallery 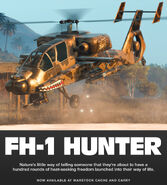 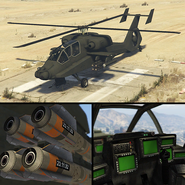 Nose of the helicopter.
Add a photo to this gallery

Retrieved from "https://gta.fandom.com/wiki/Hunter?oldid=1211491"
Community content is available under CC-BY-SA unless otherwise noted.