Humane Raid - EMP
“Acquire a Valkyrie helicopter gunship for the raid on Humane Labs. Merryweather Security are storing it at their base in the Los Santos Naval Port.”
— Brief.

Valkyrie is the fourth setup mission featured in Grand Theft Auto Online for the Humane Raid.

The crew is instructed to go to Los Santos Naval Port, where the objective is to steal a Valkyrie. The vehicle is within the Merryweather Security base of operations.

The entrance is guarded by Merryweather soldiers, so the team have to take them out and fight againsts the rest of the group, including snipers and a Buzzard Attack Chopper. More enemies will be around the helicopter's location, including a sniper on the crane.

Once the helicopter is secured, one player must pilot it, while the other three use the turrets. As soon as the group enters the vehicle, Agent 14 informs that Merryweather sent air units to intercept them, so they have to defend themselves. Two Froggers and a Buzzard Attack Chopper will spawn heading towards the Valkyrie. When the first group of enemy helicopters are taken down, a second group will spawn, this time consisting of three Buzzards. The crew should take them out quickly before they cause severe damage to the Valkyrie (although the Valkyrie is scripted with increased resistance, able to withstand three missiles before it cuts out or blows up).

Once the second enemy group is taken down, Agent 14 informs that they are clear and can safely deliver the vehicle at the drop off point off North Calafia Way, to complete the mission. 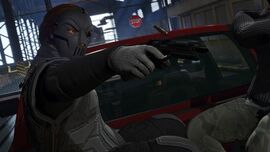 The crew raiding Merryweather's base during the setup.