View source
watch 02:56
Raise a Floppa - The Loop
Do you like this video?
Play Sound
For the actual Electromagnetic Pulse device, see EMP.

Hydra equipped with an EMP

“Get hold of an Electromagnetic Pulse device to shut down power at Humane Labs. It's currently installed in a Hydra jump jet.”
— Brief.

EMP is the third heist setup for the Humane Raid in Grand Theft Auto Online.

A cutscene plays where the crew meets with Agent 14 at the apartment's planning room. He congratulates the group for the work done before, and briefs them the next plan of stealing an EMP device from a jet, which is on a ship located in the middle of the ocean. He also states that he would also need to sell the plane so he can fund the heist. Later, he tells the crew to deliver the EMP to Humane Labs and Research and get a helicopter, which will be done later.

At the start of the heist, the crew is instructed to go to El Burro Heights, where Agent 14 informs that there is a Dinghy on the coast. The crew then uses the boat and heads in the direction of an aircraft carrier, where they are instructed to infiltrate the vessel. Agent 14 states that he knows the EMP is there because the navy crew leaked an inventory on the Dark Net and put everything on sale. He also comments that it will end up in the hands of terrorists if they do not get the plane.

Once the crew gets into the vessel's boat access on the stern, they have to fight all the way through the vessel by taking out the enemies in the hangar area. After taking out the first group, a second group appears from the other side attempting to stop the crew. Once they take out the second group and sort out the enemies on the stairs leading to the flight deck, the group now have to clear the flight deck of enemies, before one of the crew members finally gets into the Hydra. The other players can steal the P-996 LAZERs to defend the target jet. As soon as the crew steals the vehicle, the navy officer informs the others of the situation and a squadron of enemy jets are sent to bring down the Hydra. Agent 14 instructs the crew to fight against them. The squadron consist of ten jets, usually in groups of two.

Once the enemy squadron is taken out, the crew is safe to deliver the target jet to Sandy Shores Airfield to complete the mission.

Shooting down the enemy jets.

The Hydra parked inside the hangar. 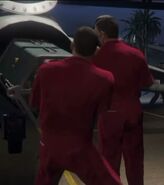 The EMP being taken out of the Hydra.

The EMP from another angle.