The Humane Labs and Research logo.

The Humane Labs and Research facility is located on Chianski Passage, deep in the San Chianski Mountain Range, Blaine County. It was formerly controlled by a pharmaceutical company owned by Maxim Rashkovsky and Dima Popov. A few years before the events of the game, the facility was leased to Merryweather Security, which was owned in part by Don Percival. They are known to have created biological weapons for the International Affairs Agency. However, the media and the public believe they are simply a perfume factory.

The research labs contain a variety of different testing rooms and storage facilities for the chemicals. On the exterior, machinery and pipes make up the facility. There are also a few garages protected by access panels and parking spots for the employees. Yellow liquid pools (presumably discarded testing liquids possibly put out for evaporation or polluted water) can be found in the southern end of the facility. Pipes and tanks seem to transport the liquid from the interior to the exterior of the facility.

It appears that the Humane Labs and Research are using monkeys as test subjects for the experiments. As seen during Chemical Extraction, The Humane Labs Raid and Monkey Business security of the area is provided by Merryweather, though there will be no guards at all in the facility during normal gameplay.

In the mission Chemical Extraction, the GTA Online Protagonist is assigned by Lester Crest to infiltrate the facility and steal a van full of a certain chemical needed to make plastic explosives. The player manages to fight through several armed Merryweather guards before hacking the security terminal, opening the garage. They take the van and drop it off at a safehouse in the Grand Senora Desert.

It is also prominently featured in the online heist, The Humane Labs Raid, in which four players have to use an EMP they planted in the setup mission Humane Raid - Deliver EMP, which turns off all electrical power. Once that is done, half of the team must parachute into the facility, break their way in via the main garage access, shoot any incoming security guards, and gain the needed files. They then swim their way out of the tunnel, and fly away. The other half pilot the Valkyrie, taking out Merryweather Helicopters en route to the drop off zone.

If the player chose the smart approach in The Jewel Store Job, then one of the preparation missions will require that Michael steals some knockout gas from a Humane Labs Boxville that is driving along the south of the Interstate 1 highway. The player can shoot the back of the van to drop the gas or hijack the van and take it to Lester.

Later in the game, during the mission Monkey Business, Michael, Dave Norton and Steve Haines infiltrate the headquarters of the Humane Labs through a underwater exhaust shaft to steal a chemical weapon being developed on the behalf of the IAA in an effort to secure government funding. The trio steal the neurotoxin, but they are discovered by the security who open fire. They manage to escape with the weapon and the news spread that the shootout in the labs was caused by some thieves who wanted to steal a "perfume recipe".

It is possibly based on the real-life Santa Susana Field Laboratory, a complex of industrial research and development facilities located in Simi Valley, California. 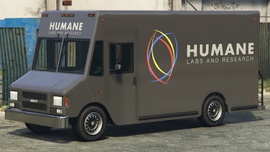 A Humane Labs and Research Boxville (Rear quarter view).
Add a photo to this gallery
Exterior

Full view of the facility.
Add a photo to this gallery
Interior

David Norton and Steve Haines infiltrating about to enter the cold room.

Scientists at work.
Add a photo to this gallery
Miscellaneous 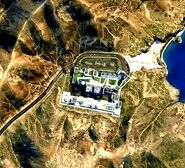 Satellite view.
Add a photo to this gallery

Retrieved from "https://gta.fandom.com/wiki/Humane_Labs_and_Research?oldid=1125513"
Community content is available under CC-BY-SA unless otherwise noted.