Hugh is a "British" music expert and one of the members of the jury in the TV show Fame or Shame, who claims to be British; however, Lazlow reveals that he's American.

Hugh judges most of the acts in the show with derisive severity, often belittling them in graphic and mean-spirited fashion. Over the course of the show, it's heavily implied that he is not actually British, but rather an American who only pretends to be British so he can pretend to be cultured and exotic (in responding to this claim on air, Hugh momentarily drops his British accent). He viciously despises the show's host, Lazlow, constantly insulting him, mostly by questioning his sexuality, and at one point even attempting to murder him on the air by beating him with his microphone. 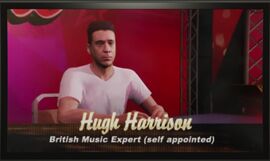 Harrison as he appears on Fame or Shame.