Huang is the spoiled son of a Triad leader who, for most his life, never had to solve any problem himself, his wealth having always gotten him out of trouble. However, when his father is murdered for mysterious reasons, Huang travels to Liberty City to deliver the Yu Jian Sword, a family heirloom won by Huang's father in a card game, to the family's new patriarch, Huang's uncle Wu "Kenny" Lee. Upon arrival, Huang is attacked by unknown assailants that steal Yu Jian and leave him for dead. Thus begins Huang's quest to find the person responsible for the theft of the sword and the death of his father, along the way working for various people in Liberty City's underworld.

A spoiled rich kid from Hong Kong, Huang owes his status as a Triad member to his father, a Triad boss from China. After the murder of his father, his uncle, Wu "Kenny" Lee calls Huang to Liberty City to help deliver a family ‘heirloom', the Yu Jian Sword, to secure his family’s claim to the leadership of the Triad gangs. However, what was supposed to be a weekend of table service and strippers turns into a dangerous adventure after arriving at Francis International Airport only to be hijacked, robbed of his sword, and left for dead. Huang dug deep into the rotten core of Liberty City - and deep within himself - to avenge his father's murder and reclaim his family's honor.

Once Huang arrives in Liberty City, an ambush is waiting for him. Huang is shot and left for dead with the Yu Jian stolen. Huang manages to escape and find his way to Kenny's house. Kenny explains he wanted to give the sword to Hsin Jaoming, the aging Triad leader, but has been dishonored by the sword's loss, leaving Huang and Kenny to work to keep their business afloat.

Huang contacts Zhou Ming, and Hsin's son Chan Jaoming, who are competing to be the successor of the Triad family. After Huang was hired by a deal that was intercepted by the LCPD, where Huang meets Wade Heston, an officer under pressure from internal affairs. Heston offers to help find the killer of Huang's father and the thief of Yu Jian. Heston suspects a Korean gang is the culprit. After fighting against the Koreans, Heston has a bug planted in the Korean headquarters, where they learn of a group called Wonsu. They conclude the leader of Wonsu is behind all this, and there is a police informant giving the triads trouble.

Meanwhile, Hsin had Huang to work for him, to find the killer and the thief, but suspects Huang himself, and tries to have him killed. Kenny however convinces Hsin to give Huang time. Hsin learns of two gangs that are likely housing the rat, the Angels of Death and the Koreans. Huang contacts Lester Leroc, an informant of the Angels of Death, and performs his own work against the Koreans. Huang is thrown off course by mobster Rudy D'Avanzo, who lies to Huang that the mole works for the Messina Crime Family. Hsin exposes his lies, and Huang kills D'Avanzo as a result.

When the Koreans and the Angels of Death are proven innocent, Huang takes a new course in the investigation. Heston and Huang hack into FIB files and two names pop up; Zhou Ming and Chan Jaoming. Hsin is disgraced that his son is a suspect, and steps down as leader of the Triads, appointing Kenny as the new leader. He allows Huang to kill both Chan and Zhou, despite both denying guilt.

Heston later calls Huang and says that the information they uncovered was fake, and that the Wonsu leader is having a meeting with his allies, and the two infiltrate the meeting. They discover Kenny, who confesses to being the rat, and killing his brother. Kenny tries to make an escape while Huang and Heston fight their way out.

Heston and Huang pursue Kenny across town, cornering him at Hsin's residence. Here Kenny explains that he was tasked by Hsin to retrieve Yu Jian, thus Huang's father would have to die for it to be passed on to him, in exchange for a position underneath Chan. Kenny complied with this but attempted to have Yu Jian stolen to keep himself from such a dishonorable position and later framed Zhou and Chan to cover his tracks.

After a final confrontation between Hsin and Kenny, Hsin demands the hand over of Yu Jian. Kenny ironically responds by stabbing Hsin with the sword as his way of presenting it to him. With Huang as a witness to the murder and truth, Kenny engages in an inevitable final battle with Huang, who is the only one left in the way of Kenny's undisputed rise to power. Huang eventually kills Kenny, fulfilling his promise to avenge his father. Immediately the IAD and FIB arrive to arrest Heston and Huang, however, Heston claims that he was in deep undercover and orders the arrest of everyone except Huang. Hsin praises Huang with the loyalty and nobility to become his true successor as the Triad boss, to which Huang has no immediate answer.

Huang is a young adult of visible Asian heritage. He has a somewhat lighter than average skin-tone, and short, medium-brown hair. He has facial hair in the form of some hard-to-spot chin stubble and a soul patch beneath his lower lip. He almost always carries an expression of bored indifference, only showing significant emotion during very few cutscenes in the game, as well as a harsher, angrier expression in the game's official artworks.

His attire remains consistent throughout the game, likely due to the top-down view making character customization rather pointless. He wears a green overcoat overtop of a red button-up tee, which is worn over top of a plain white tee-shirt. His red shirt is always open in-game, and he wears his collar up, leading to the misconception that the red shirt is actually the inner lining of the overcoat. It is seen buttoned up only in the official artworks. Additionally, Huang wears blue jeans, which aren't significantly visible, if at all, in any of the game's cutscenes, and lastly, artworks depict him as wearing two different kinds of shoes: a pair of green-and-white high-top sneakers, and a pair of brown boots, which may simply be an unintentional inconsistency on the artist's part.

Another noteworthy physical characteristic about Huang is his athleticism. He is adept in martial arts and other athletic maneuvers, such as rolling, and can vault over ledges much quicker than other HD Universe protagonists. Huang can outrun virtually every vehicle in the game, and he is also capable of knocking down street poles and destroying cars with punches alone; all three of these are things none of the other HD Universe protagonists can do.

Throughout the course of the game, Huang appears to be very cocky and quick-witted. He is portrayed to be much more intelligent than other characters in the game who seem to be oblivious to Huang's constant mocking and sarcastic remarks.

Huang does not value honor and tradition in the same vein as his Uncle, claiming that "this is 2009 and not 1403". However, he is very loyal to his family and his gang, following their orders with little hesitation, even to the point he'd murder other Triads. Huang acknowledges that he is a "pampered little snot" in the opening cutscene, and he reveals that he has visited Liberty City before where he "caught crabs off a Swiss tourist".

He seems to dislike most of the characters he gets missions from, but he shows the occasional respect for his Uncle Wu Lee (before finding out that Wu killed his father). Even after Chan and Zhou are revealed to have not been traitors, Huang never shows any remorse for killing them (especially given the fact that Chan often annoyed Huang).

The correct pronunciation for the name Huang is Hoo-ang. People mistakenly pronounce the name Hoo-ong, which is incorrect. Huang translates to yellow if written 黃, but can be translated to anything that uses the same pronunciation.

Another area of confusion is the mixed use of Mandarin and Cantonese spellings in his name. Huang Lee hails from Hong Kong, where the Cantonese dialect is more commonly used, but "Huáng" (黃) is written in a Romanized Mandarin spelling when "Wong" should be used. This also happens with his surname as "Lee", and in extension the more commonly in pinyin spelling, "Lǐ", are pronunciations in Mandarin, whereas the correct Romanized writing should be "Lei". This means Huang Lee's name may also been purely referred -in Chinese name order- to as "Lei Wong" in Cantonese and "Lǐ Huáng" in Mandarin. His early background in Hong Kong remains largely unexplained. In some Chinese-language websites Huang Lee's given name is written 皇, which has the same Mandarin pronunciation as 黃 (huáng), but here it means "royal", "regal", "emperor" and commonly used in ways associated with royalty.

This is a list of all crimes committed by Huang during the main storyline, as well as crimes that the player may commit while playing as Huang.

Huang has a record on the LCPD Database in Grand Theft Auto IV.

NOTES
- Nephew of Liberty City Triad Boss, Wu "Kenny" Lee.
- Believed to be working freelance for other organizations in addition to his uncle's. 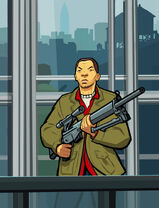 Official artwork of Huang kicking a man in the face. 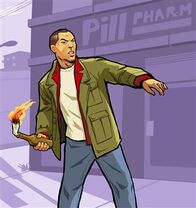 Huang about to throw a molotov cocktail.