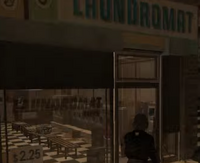 The Hove Beach laundromat is a laundromat located in Hove Beach, Broker in Liberty City. It plays a minor role in Grand Theft Auto IV. 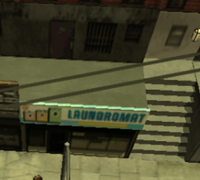 The laundromat is owned by Muscovski, a Russian immigrant who is in debt to Vladimir Glebov.

The laundromat itself is very cheap, offering washing services to customers for $1.99. The interior is noticably dilapidated, with shredded paint on the walls and chipped wood.

In Hung Out to Dry, Niko Bellic is sent to collect money from the owner of the laundromat who is late on his payments to Glebov. Niko chases Muscovski when he escapes in one of his vans.

Retrieved from "https://gta.fandom.com/wiki/Hove_Beach_Laundromat?oldid=1211234"
Community content is available under CC-BY-SA unless otherwise noted.