The stop is the only one to directly serve southern Broker and the adjacent Firefly Island, being situated at the intersection of Wappinger Avenue and Crockett Avenue in the Hove Beach neighborhood of Broker (near the Broker Safehouse and the Comrades Bar). Because of its proximity to Firefly Island and its amusements, the station is a popular tourist destination.

The station is distinctive for its dual-level design: trains to Broker and Dukes stop at the lower-level platform, whereas trains to Algonquin stop at the upper level. The station also sports various unique cosmetic designs, such as unique tiling on platform levels, a customized concourse design that sports a "FIREFLY ISLAND" stained glass window depicting an older version of the subway's train and Firefly Island's parachute jump tower, as well as a tiled "TAKE THE TRAIN TO FIREFLY ISLAND" crowning depicting Firefly Island's roller coaster and parachute jump tower, and a pair of subway cars.

There is also a parking lot under the entry staircase of the station with exit to Oneida Avenue, where part of the mission "Clean Getaway" happen involving Vlad Glebov leaving with his car the cutscene.

The design of the station is partially based on the Coney Island – Stillwell Avenue station in the New York City Subway (post 2001-2004 reconstruction), incorporating the front facade of the new extension and the design of the old south-western station house (which lends to the idea of a multi-level design). Some files' name contains "cistillw" or "stillw", which may stand for "Coney Island Stillwell" and "Stillwell" respectively. The station's dual level structure appears to be inspired by the West Eighth Street - New York Aquarium station, just to the southeast of Stillwell Avenue.

The resulting station in the game, however, generally appears older and more run down than the two actual stations.

The station is still present in GTA Chinatown Wars, but due to its simplified map and its top-down perspective, the station only has one level. 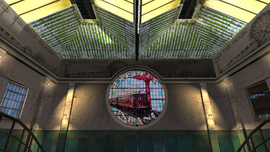 Stained glass window depicting an older train. Note the "take the train" inscriptions in the stonework around it.

A train departs Hove Beach low level towards Schlotter.
Add a photo to this gallery

Retrieved from "https://gta.fandom.com/wiki/Hove_Beach_LTA?oldid=1319221"
Community content is available under CC-BY-SA unless otherwise noted.