There are 30 liveries available to be applied, 10 of which are unlocked by competing in Hotring Circuit Races in GTA Online, each of which replicates a real life NASCAR sponsor livery or are a reference to NASCAR movies Days of Thunder or Talladega Nights: The Ballad of Ricky Bobby. 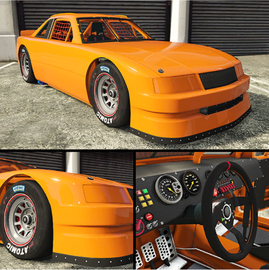 Retrieved from "https://gta.fandom.com/wiki/Hotring_Sabre?oldid=1059021"
Community content is available under CC-BY-SA unless otherwise noted.