Standard White - 100%
Not to be confused with a similar vehicle in the 3D Universe, the Hotring Racer with a similar design and purpose.
“You're either a Hotringer, or you're not, and here's how you tell. If your first instinct isn't to crack a beer on the radiator grille, polish the hood with a mouthful of spit, slap it on the rear fender, call it a "classy gal" and belch the national anthem, then you're not the target audience. On your way.”
— Southern San Andreas Super Autos description.

The car's design is a mix of the first generation Chevrolet Lumina, and the fifth generation Oldsmobile Cutlass Supreme, both of which were used as NASCAR stock cars at the time. Unlike stock cars, the Hotring Sabre has opening doors, despite not having any door handles.

The Hotring Sabre is distinguished by its simplistic bodywork, where the front end features an integrated front bumper with a black riveted extender spanning the car's width, while the inset area has a black riveted compartment that houses a lower grille mesh. On the upper area, the car has the main meshed grille on the center, while the outer sides have sectioned panels in place of headlights, which are mostly intended for sponsoring markings and racing numbers. The hood features two safety pins on the front and a meshed intake near the windshield, which opens to reveal the engine bay and the steel-tube cage.

The sides of the car are very traditional, featuring thin ridges passing through the sides and a fuel cap on the rear left section, while the bottom sides have small cutouts near the rear wheels, intended for the rectangular titanium exhaust tips. The cabin area makes use of riveted windows and rally nets on the doors (unlike its real-life counterpart, which does not have a passenger-side net), while the roof area appears to have two long blades for aerodynamic purposes.

The rear end is very simple and lack common features from traditional cars, other than a riveted ducktail spoiler on the trunk and an integrated rear bumper. Although it has a dedicated section on the center, it lacks a license plate, as it is also intended for sponsoring markings. The underside denotes the body-on-frame construction, exposing the car's bodywork and the corresponding sections for the wheels, the engine, the driveshaft, the axles and the fuel tank. It also exposes protective frames behind the front bumper.

The interior of the car makes use of steel foot rests and sport seats with race seatbelts. The Hotring includes various switches and buttons around the driver-side dashboard, and features a knob reading F/R, likely indicating a rear/four wheel drive locking diff. The steering wheel itself includes various buttons and paddle shifters, and a large extended gear-shifter is centralized on the console between the seats. Also, a radio is seen located under the dashboard, on the center.

The bodywork and part of the engine are painted with the primary color, while the roll cage is painted with the secondary color. Similar to vehicles like the ETR1 and RE-7B, the Hotring Sabre features Atomic racing slicks for the stock wheels, along with ten-spoke rims.

The vehicle is powered by a single-cam V8 fitted with an intake manifold coming from the front intake, coupled to a 4-speed gearbox in a front-engine, rear-wheel-drive layout. Its engine sound is similar to the Viseris, being a lower-pitched variation of the one used in the Vigilante.

There are 30 liveries available to be applied, 10 of which are unlocked for purchase by competing in San Andreas Super Sport Series (originally called Hotring Circuit) Races in GTA Online. 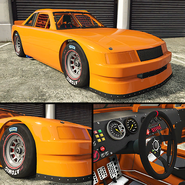 The Hotring Sabre on the updated Rockstar Games Social Club. 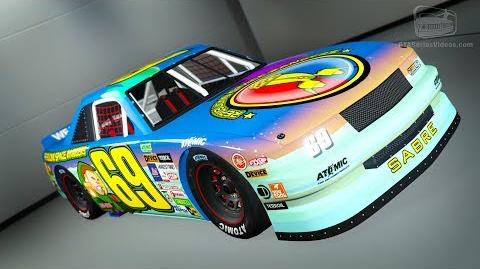