GTA Wiki
Register
Don't have an account?
Sign In
Advertisement
in: Vehicles, Hotrods, Vehicles in GTA Online,
and 5 more

The Hotknife is a late 1920s/early 1930s Hot Rod resembling a 1931 Ford Model A coupe, with modifications and a custom paint job.

The vehicle may spawn with or without a cover for the engine bay and is only available in a single paint scheme; a purple body with white accents and a black roof.

The Hotknife returns with a slightly updated design, being based on a 1933 Ford Model 40B, albeit modified with a lowered suspension, wider tires, and a low "chopped" roof, which are common hot-rod modifications for this model.

The front of the Hotknife features a sleek chrome grille with what looks like the symbol of a bent sword pointing down, placed over two edges that are part of the vehicle's chassis. Two circular lamps can be seen on either side of the grille. On the sides, large fenders may be seen running along the vehicle, covering the wheels and having black steps on the middle section, while the engine bay area features exhaust stacks on both sides. The cabin area features two classic circular rear-view mirrors finished in chrome, placed near the A-pillar. The rear of the car is very traditional, featuring a curved trunk with a chrome handle, and two circular tail lights below the same. The car lacks any sort of bumper and only features a license plate mounted below the bodywork. On the lower side, the suspension is composed of small shock absorbers and articulated bars that start in the vehicle' structure and ends in the axle shafts. Its interior is shared with the Peyote, using the same large analog dial on the driver side.

The fenders and the engine bay cover are considered extras. Therefore, the Hotknife will spawn with exposed wheels and engine, revealing two support frames passing over the engine, as well as red wiring coming from an open space located in the driver's cab. The vehicle spawns in a variety of two-tone colors, with the primary one on the front, sides and fenders of the vehicle and a secondary one on the hood, roof and curved rear. The stock wheels are similar to the "Wired" lowrider rims available in Los Santos Customs.

For what the Hotknife lacks in being easy to find, it makes up for in being a very fun vehicle to drive. It handles well on-road and off-road. There is a great acceleration to be had from the V8 up front, resulting in great air times when going off certain jumps, but its top speed is ultimately lower than the more aerodynamic cars found in the game. Its cornering is not too good, which makes turning at high speed somewhat difficult, but this can be solved by using the handbrake. One bad aspect about this car is its poor endurance in crashes because of the exposed front suspension and radiator, which is made up for by the suspension being so good that it rarely tips over. Important to note are the car's side steps, which can actually collide with curbs when turning due to the car's extremely low stance.

The vehicle is powered by a V8 engine fitted with a bug catcher on top, a 5-speed gearbox and a rear-wheel drivetrain.

The Hotknife has acceptable acceleration and top speed which is average for a Muscle car. Its handling, though, is outright terrible. It has immense understeer, and feels very uncomfortable to steer through traffic, to such a point that high speeds make the car feel almost impossible to steer. This understeer-heavy trend even continues into the lower speeds. The Hotknife's braking is also poor, and this leads to a nasty combination where the car will wreck frequently. What makes the Hotknife worse is how it handles crashes. Being relatively light and lacking much downforce, the Hotknife is almost always taken out by traffic to unrealistic results. In a collision, it will regularly end up being sent rolling or airborne briefly while the traffic will often emerge almost unaffected. Deformation is strong though, and the car will be able to take a decent amount of abuse before being out of commission.

Being a muscle-like vehicle, the Hotknife comes with a carburetored single-cam V8 engine. This gives the vehicle a loud engine sound, in a similar manner to muscle cars like the Dominator and the Gauntlet.

The licence plate of the Hotknife in Doherty, reading "GOLD".

Pre-release screenshot of the Hotknife.

A modified Hotknife, with hood removed and a Single Intake Bug Catcher engine.

A Hotknife variant, with stock hood and fenders. 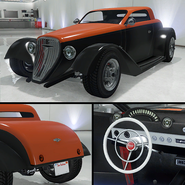 The Hotknife on Legendary Motorsport.

The Hotknife on the Rockstar Games Social Club.

The Hotknife on the updated Rockstar Games Social Club.

The Hotknife in a cinematic preview on the Grand Theft Auto V Rockstar Games Social Club.

The Hotknife in a cinematic preview on the Grand Theft Auto Online Rockstar Games Social Club.

Like the Phoenix, the Hotknife is an extremely rare car to find in GTA San Andreas, but with patience and searching in the right places, it will eventually spawn.