It's based Marriott Marquis in Times Square.

Its logo is a combination of 'hü'. From its name, it is clearly a German hotel. It is located along the Denver-Exeter Avenue in Star Junction, Algonquin.

There are advertisements of the hotel on the Union Drive West and Francis International Airport. The hotel also features an LED advert for the Bank of Liberty, which is similiar to Bank of America LED advert in Marriott Marquis, Times Square.

It is not enterable and has no role on the storyline whatsoever. This hotel is also featured in the website Peepthatshit.com. 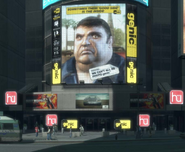 Billboard advertisement.
Add a photo to this gallery

Retrieved from "https://gta.fandom.com/wiki/Hotel_%C3%9CberBr%C3%BCcker?oldid=1114342"
Community content is available under CC-BY-SA unless otherwise noted.