20
“Previously, only completists have been able to enjoy this hot-rod styled special edition ATV. The flaming paint job, hood blower and V8 side pipes make this baby sound as good as it looks. Still liable to roll and kill you on the highway though.”
— Southern San Andreas Super Autos description.

The vehicle is a customized variant of the Blazer, sharing the same chassis, handlebars and suspension setup. As the name suggests, the bodywork assumes a hotrod-like appearance, where the front section features a small grille, two circular headlights, a small blower intake, eight miniature side exhausts and a small front windshield, while the rear section features a small rear window on the upper side, the exhaust tip on the center and four circular tail lights on the lower side. The seat is also smaller, enough for the rider.

The vehicle normally spawns in a black primary color with a flame decal on the front area, although one can paint the body color via mod shops. It also uses the same wheel design as the regular Blazer and the Lifeguard variant. 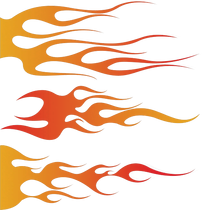 Performance-wise, the Hot Rod Blazer is superior to the regular Blazer, having a great acceleration and a good top speed, while retaining the off-roading capabilities and the tight steering. However, players should be careful of its sensitive handling and the lower stability, as it may lose control easily and eject the player easily after a hard collision.

Like the regular Blazer and the Lifeguard variant, the Hot Rod Blazer appears to be powered by a parallel-twin engine, coupled to a 5-speed gearbox and powering all wheels, with a power distribution of 20% to the front and 80% to the rear. The engine sound is also different, being the same as the one from chopper bikes such as the Bagger and the Police Bike. 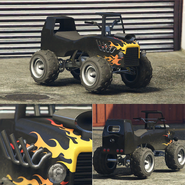