In-game time
“Retrieve a package from a high security area and deliver it to the drop-off location.”
— Work description.

Hostile Takeover is CEO/VIP Work featured in Grand Theft Auto Online, added as part of the Executives and Other Criminals update.

Once the mission is started from the Interaction Menu, the VIP/CEO has the option to choose from four different locations: LSIA, Merryweather Base, Fort Zancudo, or the Altruist Camp. Once chosen, a yellow marker on the map indicates the GPS route to the said location. Each location has a slightly different premise, but each require the organisation to steal either a briefcase or a Rhino tank.

No matter which variant of the mission is started, the organisation will receive a wanted level once the target object is retrieved. While the mission is active, all services which remove the player's wanted level, such as Lester's "Cops Turn Blind Eye" or the CEO's "Bribe Authorities" options, are made unavailable until the mission ends. While the briefcase/Rhino can be delivered while a wanted level is still active, it is not impossible for members to evade it beforehand.

“New Contract Alert: Intercept a courier at LSIA and acquire his briefcase. Drop off to be confirmed when you have the case. Warning: the courier will have protection, and multiple VIPs could be competing for this contract.”
— SecuroServ message.

The high security location is within the hangar south of the airport, where Franklin Clinton's hangar is located. Inside is the executive stood beside a black Super Diamond and four FIB members with an FIB Buffalo. All are armed with Carbine Rifles. The player needs to kill the courier, pick up his dropped briefcase, and deliver it to one of two possible drop-off locations, either a house on North Sheldon Avenue in Vinewood Hills, the Pacific Bluffs Country Club, or Vinewood Bowl. The organisation receives a four-star wanted level once the briefcase is picked up.

“New Contract Alert: Obtain a package being protected by Merryweather Security Consultants. Drop off to be confirmed when you have the package. Warning: multiple VIPs could be competing for this contract.”
— SecuroServ message.

The briefcase is located inside an office at the front of the warehouse, where several Merryweather units are found with high fire-rate weapons and armor. Numerous Merryweather mercenaries are scattered around the ground level and on the formation of the dock where the dock-crane and helipad are located. Once the player makes their way inside the office, they need to pick up the briefcase and deliver it to either a mansion in Richman, a small farm just west of the Senora Freeway, or to a building behind the Vinewood Sign. The organisation receives a four-star wanted level once the briefcase is picked up.

“Update: Merryweather have requested police support. LSPD teams will arrive soon. Get the package to the drop-off ASAP.”
— SecuroServ message after the briefcase is retrieved.

This is the only variant of the mission where the objective is not a briefcase but rather a Rhino tank, which is located in a large hangar in Fort Zancudo. It is guarded by many military soldiers and an officer. The organisation is required to make their way past all the guards, steal the tank, and deliver it to either Chumash, a house near Harmony, or to the Paleto Forest Sawmill.

“New Contract Alert: Collect a package being held at the Altruist compound in Chilliad Mountain State Wilderness. Warning: they will not give up the package willingly, and multiple VIPs could be competing for this contract.”
— SecuroServ message.

The briefcase is located at the end of the camp out in the open, being held by a cult leader and guarded by 3 cultists. All four are armed with Carbine Rifles. Multiple other cultists are also scattered around the camp and will fire on sight with pistols. The player will not earn a wanted level when they provoke the enemies, although if they kill some, they will earn 1-2 stars depending on circumstances. Once the briefcase is obtained, a three-star wanted level is attained. The organisation needs to deliver the briefcase to either Marlowe Vineyards, the Stoner Cement Works storage facility, or a large warehouse in Grapeseed.

“Update: An LSPD detail were watching the Altruist. Avoid police teams and bring the package in.”
— SecuroServ message after the briefcase is retrieved.

Farm west of the Senora Freeway (Merryweather Base).

Mansion in Richman (Merryweather Base). 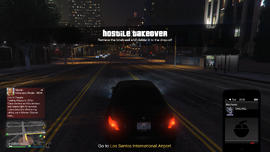 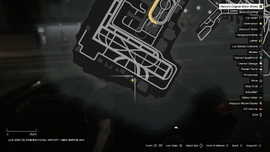 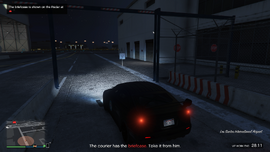 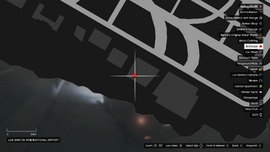 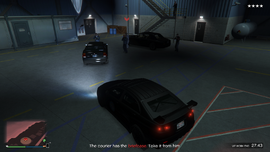 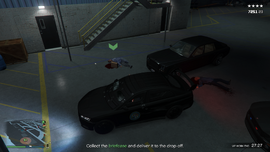 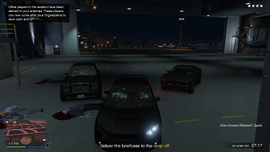 Deliver the briefcase to the drop-off. 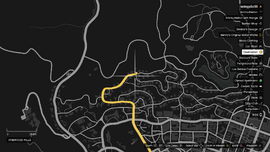