Sean Krishnan
“Ahh, we all do dumb things... that's what makes us human.”

— Hossan Ramzy to Niko Bellic in The Cousins Bellic.

Hossan is an Egyptian merchant seaman who worked alongside Niko Bellic onboard the Platypus. In the game's introduction, he expresses a desire to "make a go of it" and enter the United States to live the American Dream. In an e-mail, Hossan says that he has jumped ship in Florida, but expects to return soon. Hossan returns to Liberty City sometime before the events of The Puerto Rican Connection, becoming a street vendor selling counterfeit purses and handbags in Suffolk.

Niko reunites with Hossan in a random encounter in western Algonquin, where he works as a street vendor. During this encounter, he and Niko pursue and kill a man who refused to pay Hossan for his work due to his status as an illegal immigrant. 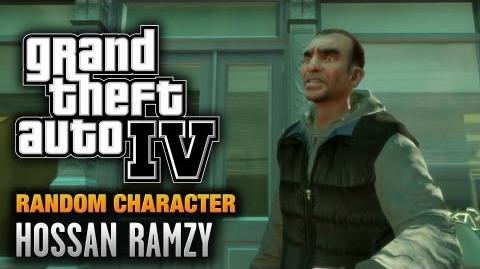