The beef with the bone!

It is located at the intersection of East Mirror Drive and Mirror Park Boulevard in Mirror Park, Los Santos. Its slogan is "The beef with the bone!". According to the front door advertisements, the business sells burgers, tacos and hashbrowns.

The building is similar to Up-n-Atom Burger chains, sharing the same yellow color, having a drive-thru, and a similar shape. The restaurant's crescent-shaped logo is also similar to the golden arch Up-n-Atom uses as well. A branch of the store can be seen in the fourth episode of Republican Space Rangers. Horny's Burgers is inaccessible to the player and plays no role in the storyline.

Horny's may be a parody of Hardee's/Carl's Jr., who are known for their sexually provocative (and controversial) advertising; however, the items it specializes in are more of a reference to Jack in the Box. 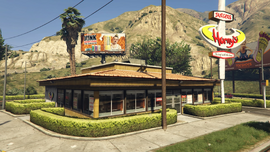 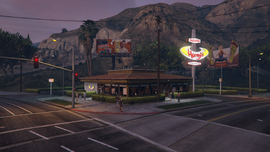