"Bring out the Beast."
―Motto

Horn Deodorant is a deodorant brand in the HD Universe of Grand Theft Auto.

Horn is a parody of Axe Deodorant, and Horn's effect lasts 48 hours (2 days).

Horn billboards and advertisements can be found in some areas; the most notable one is located in Star Junction which features a large elaborate tube and looks like an enlarged horn. At 1 pm, large amounts of green gas are sprayed out of the end of this horn, to simulate the deodorant spray. It stops at 2 pm.

In Grand Theft Auto V, all 24/7 and LTD Service stores sell Horn Deodorant, and a magazine depicting an advertisement of Horn (ripped from GTA IV) is found in the De Santa Residence, next to Jimmy De Santa's bed.

In Grand Theft Auto Online, the company is featured as a minor sponsor on one of the custom liveries for the 190z. 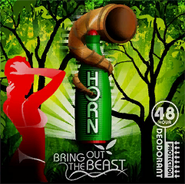 Another view of the billboard.

Horn deodorant in 24/7 seen in GTA V.
Add a photo to this gallery

Retrieved from "https://gta.fandom.com/wiki/Horn_Deodorant?oldid=1205234"
Community content is available under CC-BY-SA unless otherwise noted.