It is located at the intersection of Power Street and Vespucci Boulevard in Pillbox Hill, Los Santos.

The hotel is a 10-story building that features a mural advertisement for the talent show Fame or Shame on the south facing wall. It is modeled after the real life Figueroa Hotel in Downtown Los Angeles, which is known as a significant spot for advertising and which has displayed Grand Theft Auto series [1] [2] [3] and Max Payne [4] advertising in the past. The building is not accessible and plays no role in the storyline. 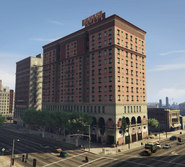 Front of the building on Vespucci Boulevard.

Fame or Shame advertising billboards.
Add a photo to this gallery

Retrieved from "https://gta.fandom.com/wiki/Hookah_Palace?oldid=1145651"
Community content is available under CC-BY-SA unless otherwise noted.