In Grand Theft Auto: San Andreas, there are several billboards advertising the cigars in the three cities of San Andreas but especially in Los Santos. In Binco, it is possible to buy a shirt with the Homies Sharp logo. The brand is one of the sponsors of the Hotring Racer.

In Grand Theft Auto IV, some pedestrians are seen wearing a t-shirt with the Homies Sharp logo and kiosks in Liberty City sell Homies Sharp, but the player cannot buy them. Tobaccofacts.net also promotes Homies Sharp.

A Homies Sharp t-shirt could be aquired in Grand Theft Auto Online through special Crate Drops during the I'm Not a Hipster Update weekend event.

It seems to be based on Phillies Blunt, which is a cigar that is widely known throughout the urban community as a popular wrap to roll marijuana inside of. They have similar logos, the difference being that Homies Sharp use a diamond shape logo with a silver outline while the Phillies Blunt logo has an oval shape with a gold outline. 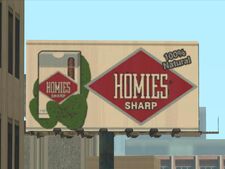 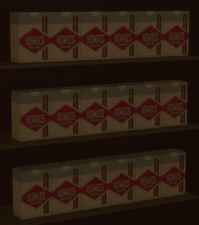 Packs of Homies Sharp cigars in a kiosk in Grand Theft Auto IV.

Homies Sharp T-shirt in GTA Online.
Add a photo to this gallery
Retrieved from "https://gta.fandom.com/wiki/Homies_Sharp?oldid=1161511"
Community content is available under CC-BY-SA unless otherwise noted.